In a new beauty tutorial with Vogue, Gigi Hadid walks us through her getting-ready routine as a new mom. During her recent pregnancy with daughter Khai, the model said her skin-care regimen shifted toward clean, natural products, mostly made from olive-tree extract. However, postpartum, Hadid shares an undated routine, adjusted to new motherhood and the dry winter season.

Now, Hadid says that her main goal is keeping her skin moisturised. “I’ve now moved into my winter routine, which for me, is about a thicker moisturiser,” the model explains, liberally applying the Dr. Jart+ Ceramidin Cream over her face. She follows that with Odacité’s moringa-oil concentrate, designed for very dry skin, which is how the model describes hers year-round.

In the past, Hadid admits to occasionally over-exfoliating her skin. “In high school, I would use that St. Ives Apricot Scrub,” she confesses, adding that she now uses Cetaphil as a gentler drugstore alternative. “I’ve always gone for drugstore skincare,” she says. “Pregnancy is different — and I really wanted something clean for that — but before, I just wanted good products, and I don’t think you have to pay a lot for that.”

Even with perpetually dry skin, Hadid says she’s not immune to breakouts. In the event of a pimple, she says her secret is an old-fashioned home remedy. “A strange thing that I do, which my mom taught me, is I put toothpaste on spots at night and it dries it out,” she says.

During her pregnancy, Hadid says she experienced a bit of skin pigmentation, which is a common occurrence for many women when hormones are in flux. “I’ve had this darkness near my eye from before my pregnancy, but it got really dark when I was pregnant,” she explains. “I tried to wear hats in the sun and sunblock. But also, like, let it happen. it’s natural — I knew it would go away after I gave birth.”

Reflecting on her first four months of motherhood, Hadid says it’s been all about being easy on herself. “I just want to remind those of you watching that this is not how I look every day,” she says. “Sometimes I go a week without touching makeup or, you know, just putting on deodorant is like, we’re doing great.” 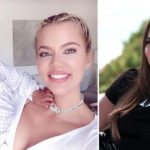 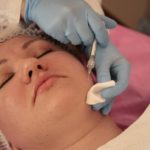