Ben Affleck and Ana de Armas has split up after a less than a year of dating, accoring to reports.

The Hollywood stars recently moved in together, however, sources claim the relationship has now run its course.

A source told People: ‘Ben is no longer dating Ana. She broke it off. Their relationship was complicated. Ana doesn’t want to be Los Angeles based and Ben obviously has to since his kids live in Los Angeles.’

Another source also claimed the breakup was ‘mutual’ and the pair remain ‘amicable’.

They continued: ‘They are in different points in their lives; there is deep love and respect there. Ben continues to want to work on himself. He has three jobs lined up and he’s a solid father at home. They are both happy with where they are in their lives.’

The pair met on the set of their movie Deep Water and were later spotted getting food together in Havana.

The lovebirds finally went Instagram official on May 1 as they celebrated Ana’s 32nd birthday.

Doing the best they could while abiding with lockdown rules, the couple took a walk in the desert as Ben treated Ana to birthday balloons and a cake.

The couple were then thought to have moved into the Batman actor’s LA pad in December after Ana put her house on the market.

Ana is best known for her starring role in Knives Out alongside the likes of Daniel Craig, Chris Evans, and Jamie Lee Curtis.

Ben, meanwhile, is known for movies like Good Will Hunting, Batman vs Superman, and Gone Girl. 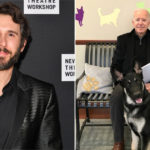