David Walliams now has ‘hope’ after his mother received the Covid-19 vaccine.

The Britain’s Got Talent star confirmed that his beloved mum Kathleen, who is 77 years old, was given the vaccine yesterday, and thanked the scientists behind the jab, as well as the NHS staff who administered it, for giving them joy and hope.

The 49-year-old comedian tweeted: ‘My mum is 77 & was given the vaccine yesterday. When I spoke to her last night I could hear the joy in her voice. Now there was hope.

‘Thank you so much to the clever scientists for developing it & the brilliant NHS for delivering it. You have made my mum & I very happy.’

David’s followers celebrated the ‘fantastic news’ and hoped that it would be a return to some kind of normality for the family.

According to government figures, over four million people in the UK – including people in their 70s and over and the clinically vulnerable – have received their first doses of the vaccine.

The Little Britain star is close with his mother, and Kathleen often accompanies her son to premieres and showbiz events like the Bafta Television Awards.

In June 2020, David shared his reunion with Kathleen after being forced not to see her for several months at the beginning of the pandemic.

He posted pictures to Instagram, showing himself beaming as he stood two metres behind his mother in her back garden.

Kathleen is also mum to Julie; her husband Peter died in 2007 from an aggressive form of liver cancer.

She is also grandmother to David’s son Alfred, seven, with his ex Lara Stone, and the Dutch model celebrated her 37th birthday in December by sharing a rare picture of him.

Hiding his face with a heart-eyed emoji, Lara, 37, had an arm around Alfred as they prepared to blow out the candles on her birthday cake.

She captioned the picture: ‘My sweet Alf made me this beautiful birthday cake ? ? Having the best day with just the 3 of us.’

Lara is engaged to boyfriend David Grievson, having previously been married to David from 2010 until 2015.

Speaking about his son during an appearance on Lorraine in November, David admitted that he tests out material for his children’s books on Alfred – even if they’re not quite his style.

He said: ‘The good thing is that my son is now seven, so there is an opportunity for me to try out things, especially things like titles on him.

‘I’ll go, “Do you think Code Name Bananas is a good title, do you think that’s funny, can you ask your friends at school?” It’s good to be able to test things out on kids as much as possible.’

‘But I kind of just like to be dad, I don’t want him to be in therapy for years to come going, “My dad made me read all of his books and wouldn’t let me read anyone else’s!”’ 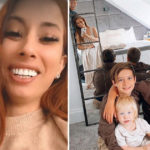