Eddie Izzard has described using female pronouns as ‘a promotion’.

The 58-year-old comedian – who was praised by viewers in December when she requested the use of ‘she’ and ‘her’ pronouns on Sky Arts Portrait Artist of the Year – has opened up on being ‘gender fluid’ and how ‘language can change’ as time goes on.

Appearing on the Life, Interrupted podcast, she told Simon Thomas: ‘Your biological body [can give] different signals as to how it is in the brain, but I do feel gender fluid – I have got boy genetics and girl genetics, so I call it boy mode and girl mode.

‘These may not be great phrases but I can’t think of better words. Man mode and woman mode doesn’t sound good so I’m going with those at the moment, but language can change over the years.

‘I am gender fluid, I do seem to be a mixture, but I’m now based in girl mode as a trans woman. And now that pronouns have come out [it] feels like a promotion, I’m very happy with that.’

And Eddie – who has appeared in the likes of Hannibal, Ocean’s Twelve and The Cat’s Meow – revealed how she will still use those pronouns even when playing a male for an acting role.

She explained: ‘Even if I go and act in a film in boy mode, I will still be she. It’s just an acting role so it doesn’t really matter. Everyone needs to calm down on the pronouns, it’s not such a big deal, people get very stressed about it.’

The star also commented on ambitions for a political career after previously revealing her plans to run as a Labour MP.

‘I wanted to get a seat as a member of the Labour Party to be an MP in the last election – that didn’t happen for whatever reason,’ she said, while confirming she will either run in an upcoming by election or the next general election.

‘I’m entering the political phase of my life. And then like Glenda Jackson, like maybe Arnold Schwarzenegger, I will come out again and come back to more stand up comedy in different languages – Arabic and Russian, I still got to add on to Spanish, German and French and more dramatic roles.’

Eddie has a new film Six Minutes at Midnight on the way, but she is keen on a move into politics once the pandemic eases and the situation is easier to navigate.

She added: ‘I love doing films, stand-up, dramatic roles and then comedic roles, it’s weird having this mixture. But politics is what I’m about to go into once we get through this hellish Covid.’

Life, Interrupted is available on Global Player or wherever you get your podcasts every Monday. 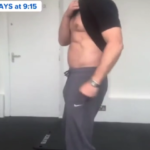 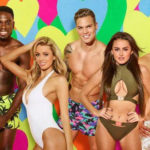