Emma Willis has shared a brilliant message to social media, not long after she was left ‘overwhelmed’ by the positive response to her son breaking gender stereotypes.

In October last year, Emma shared a snap of nine-year-old Ace, who was seen rocking a pink crop-top, ripped jeans and pink trainers, as well as long blond locks.

Many fans of Emma’s praised his ensemble and rightly so, we have to say.

Now Emma has doubled down on the message, sharing a post from page @myboycan, which read: ‘Boys can like pink.’

The presenter, who had dubbed her son her ‘little style icon’, added a heart and clapping emoji to her Instagram Story on Wednesday.

The original post on @myboycan’s page read: ‘Pink is not gendered!

‘Anyone can like a colour, wear a colour, have toys this colour….it does not determine anything other than someone likes that colour.’

‘It’s just my son in a pink top. And for me that’s kind of normality.

‘He loves colour, he’s always had long hair and he’s a very free and open-minded boy who doesn’t really… he’s like, Why do I have to dress in green and blue and grey if I like pink and red and purple – why isn’t that OK?”

‘He’s kind of always been that way. We, I think, are trying to raise him as a very open-minded and inclusive individual.’

Emma – who shares three children with her husband, Busted star Matt Willis, Isabelle, 11, Ace, and Trixie Grace, four – added: ‘There was a couple of negative bits, but the block button is a great thing.’

Fans of Emma’s inital post hit back at anyone who took issue with what a child is wearing, as one said: ‘Just shows how far we have to go in breaking down gender stereotypes. Pink is simply a colour. Hair grows. Let kids (or adults) wear whatever they want!’

Another added: ‘Your son is an inspiration. Coming from a mummy of a son who loves pink, Rainbows and his Elsa dress. He is following his own story and not bound by stupid society stereotypes.’ 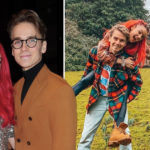 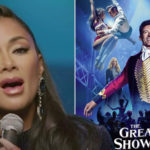