Gemma Collins has revealed the government’s Tier 2 rules meant she almost got stuck in the bath after having to buy substantial meals while out drinking.

Prior to London being plunged into Tier 3 restrictions due to cases rising amid the ongoing coronavirus pandemic, Tier 2 rules meant people were only allowed to drink in bars and restaurants if they ordered a substantial meal to go along with it.

The Towie star, 39, who previously lost three stone in weight, revealed that all the substantial meals she was forced to eat meant she almost had trouble getting out of the bath during a recent hotel stay.

Speaking on The Gemma Collins Podcast, she revealed: ‘I have got to stop eating. The new rule is every time you want a little glass of wine or some mulled wine, you have to order food.

‘Me and my mum were laughing our heads off, I wasn’t stuck but I was like “Mum, I’m nearly getting stuck here in the bath,” because I had a nice mulled wine at Fortnum & Masons and that was on my bucket list to do.

‘And literally they said, “You’ve got to order some food.” Well I’d just eaten at the last place I’d had a glass of wine at, so I said, “I’ll have some pigs in blankets.”’

However, the meals didn’t stop there as Gemma was forced to buy food every time she wanted to have a drink.

She added: ‘Then my mate wanted a mulled wine and I was like, “Right OK, I’ll have to order a scotch egg as well.” Then my mate goes, “I don’t eat scotch eggs.”

‘So there I am faced with pigs in blankets and a rather large scotch egg with a side of piccalilli – well I had to eat it.’

Gemma concluded: ‘So I’m just hoping that soon we will resume back to normal because I don’t fancy getting stuck in the bath any longer.’

That’s definitely something we can all relate to, especially with Christmas around the corner too.

With Tier 3 rules now in place in London and other parts of the country, pubs and restaurants can only serve takeaways as sit-in meals are not allowed. 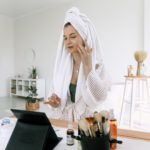