Gigi Hadid has opened up about giving birth to her baby daughter Khai after 14 hours in labor as the model graced her first solo cover for Vogue magazine.

The 25-year-old supermodel revealed she didn’t even reailse the moment she had delivered her daughter until she saw her boyfriend Zayn Malik holding her after the home birth which took place in September.

Gigi and Zayn welcomed their first child together at her family ranch in Bucks County, Pennsylvania in September with her mother, Yolanda, sister, Bella, a local midwife, and her assistant by her side.

Opening up about her ‘crazy’ experience to Vogue, Gigi explained: ‘I had to dig deep. I knew it was going to be the craziest pain in my life, but you have to surrender to it and be like, “This is what it is”. I loved that.

‘There definitely was a point where I was like, I wonder what it would be like with an epidural, how it would be different. My midwife looked at me and was like, “You’re doing it. No one can help you. You’re past the point of the epidural anyway, so you’d be pushing exactly the same way in a hospital bed.”

The star admitted she couldn’t remember much about the moment she gave birth and stated she was like ‘an animal woman’ during the intense process.

Gigi claimed she didn’t had no clue Khai had come out, stating: ‘It didn’t even click that she was out. I was so exhausted, and I looked up and he’s holding her. It was so cute.’

The star went on to reveal her pride about landing her first solo cover as she embarks on this motherhood journey as she shared it online with fans.

The glowing mama wrote in the caption: ‘Who would have thought I’d be feeding my baby girl her morning bottle as we share my first @voguemagazine solo cover ?! ?

‘I am emotional and honored to take my first professional step, in this new chapter of womanhood, with this dream come true!’

She revealed she was with her baby daugther as she shared the post, adding: ‘Khai is now rockin’ in her Nemo bouncer so I can type this, and I’m reflecting on all the people, memories, flights & fittings, early mornings, late nights, laughs & tears, mishaps & miracles that have made up my almost-decade in fashion.’

Gigi continued: ‘These friendships, creative bonds, and the little moments, in between the big ones that the world sees, have been the greatest blessings of my career. Anna, I am so grateful for this moment.

‘I dedicate it to everyone who has lent me their time and talent in any way over the years.’

The model ended her post with a sweet shoutout to fellow moms as she concluded: ‘I also dedicate it to all the moms who haven’t brushed their hair in a couple days, either! Cheers!’ 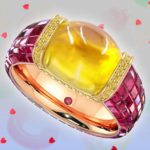 Haribo-inspired ruby-encrusted engagement ring could be yours for £25,000 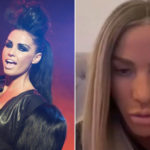