Alex Beresford has got his jab (Picture: Shutterstock)

Good Morning Britain’s Alex Beresford has shared his experience of getting the Covid-19 vaccine, joking he knows he doesn’t look old enough.

The presenter, who hit headlines recently for his confrontation with Piers Morgan before the star left GMB, masked up for the exciting occasion.

Shared a snap of himself mid-jab with his sleeve rolled up, the 40-year-old penned: ‘I know I don’t look old enough…Completed it!’

People aged 50 and over, vulnerable people, and carers are currently eligible for the vaccine, according to the NHS. However, this may differ slightly in different areas, depending on the speed of rollout to the priority groups.

In the UK, more than 28million people have been given the first dose of their coronavirus vaccine.

Fans are thrilled for Alex, as he follows in his GMB co-star Susanna Reid’s footsteps, who also got her jab this week.

The presenter, 50, confirmed she got the jab on Twitter, sharing a snap as she flashed a thumbs up during her appointment.

‘JABBED! Thanks to Kamilah who administered the AZ vax (& Graeme who booked me in),’ she captioned the post.

‘Thumbs up to all the hard-working staff & volunteers at St Thomas’ Hospital vaccination centre (where Boris Johnson also got his today) on a record day for jabs.’

Alex returned to GMB last week, 10 days after his clash with Piers. The confrontation over Piers’ comments about Meghan Markle following her and Prince Harry’s interview with Oprah Winfrey, saw the journalist storm off set, just hours before he quit the show after six years of presenting.

‘I understand that you don’t like Meghan Markle, you’ve made it so clear a number of times on this programme,’ Alex said at the time.

‘I understand you’ve got a personal relationship with Meghan Markle, or had one and she cut you off… She’s entitled to cut you off if she wants to.

‘Has she said anything about you since she cut you off? I don’t think she has, but yet you continue to trash her.’

As a result, Piers stormed off the set saying he wouldn’t be ‘trashed’ on his own show. 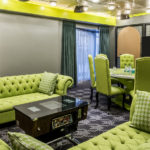