Alice Evans has confirmed she has started to discuss legal separation with estranged husband Ioan Gruffudd, but insists they are ‘still friends’.

News of the couple’s split was confirmed earlier this month after Alice claimed on social media that Liar actor Ioan had walked out on their family – the pair are parents to daughters Ella Betsi, 11, and Elsie Marigold, seven.

Now in her latest statement, Alice has thanked her supporters for their ‘kind comments’ and said she ‘gets’ the unkind ones.

‘It must be weird to comprehend why somebody would share their pain on social media rather than with their nearest and dearest,’ she explained.

‘I get that. You must think I’m an a**hole. I’m not though. I don’t have a mum, or a dad. I don’t have any close friends in LA. I’ve looked after my kids for half their lives alone. My husband knows that.’

Alice then revealed: ‘We are indeed discussing legal separation, but we are still friends. You can say what you want about me being an attention seeker but you know it’s not true.

‘You just want a reason to put me down. Please – go ahead. I’m impenetrable ❤️.’

In her previous statement, Alice, 49, stated she ‘still loved’ Ioan, 47, despite the end of their marriage and the abrupt manner it ended.

The 102 Dalmatians actress wrote in her previous Instagram post: ‘The pain is excruciating but I am stronger than an ox, and though I weep all day when my kids aren’t looking, at night I add up figures and plan futures for us and you know what? I will do those two angels right if it’s all I ever do.!’

Ioan is yet to personally speak out about the split but he and Alice issued a joint statement to People, which said: ‘As you can imagine, this is an incredibly difficult time for our family and we remain committed to our children.

The former couple met on the set of 102 Dalmatians in 2000, when Alice was in a relationship with Olivier Picasso, the great-grandson of Pablo Picasso. They began dating, and in 2007, the couple got married in Mexico. 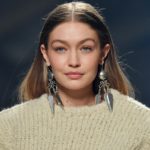 Why Gigi Hadid Decided To Have A Home Birth