Jamie Lynn Spears has been forced to clarify comments she made while ranting about Tesla being a ‘secret cat killer’.

The Zoey 101 actress, 29, was seen venting her frustrations over the electric car company, founded by Elon Musk – who was recently named the richest person in the world – and losing a number of her cats.

Jamie left fans concerned as she called the car-make a ‘secret cat killer’ and suggested improvements be made to the vehicle to improve the safety of animals.

‘I know there’s much bigger things going on in the world right now, but somebody’s got to let Elon Musk know that the Tesla is a secret cat killer and it’s a problem that we really got to fix,’ she said.

‘We have now lost – I don’t even want to tell you how many cats,’ Jamie went on, adding: ‘Since the Tesla is so quiet, maybe [Musk] could like make one of those noises that bothers cats or animal ears when it cranks up.

‘That way they know something’s happening and they aren’t caught off guard and things don’t end in a very tragic way.’

Fans took that to mean that Jamie had ran over her cat while using her Tesla, forcing the star to address her comments.

She insisted there had bee a misunderstanding and stated she had not harmed any cats and that she had never intended to put the blame on Tesla.

Sharing a statement addressing her previous rant, Jamie said: ‘Just to clarify 1) I did not run over any cats. 2) Tesla is not to be blamed, and was never intended to be. 3) User error is admittedly involved.

‘4). We always check for animals before moving vehicle. 5) I was only making a suggestion about something I think would be extremely helpful and the geniuses at Tesla are the best to go to for said issue. xoxoxo’

Alongside a snap of her posing in a tie-dye tracksuit, Jamie made sure to point out she had nothing against her Tesla car, as she added: ‘Here’s ya quote: “I friggin love my @teslamotors” – Jamie Lynn Spears.’

Jamie is the younger sister of popstar Britney Spears, 39, and is married to husband Jamie Watson, who she tied the knot with in 2014.

They are parents to two children; daughters Maddie, 12, and Ivey, two. 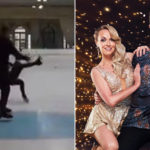