He was once Tinseltown’s hottest property… but Josh Hartnett walked out on Hollywood, deciding he would rather be Superdad than Superman.

The Pearl Harbor heart-throb says he didn’t fancy being the sort of A-lister who worried about when the ‘next big thing’ would be snapping at his heels.

His decision also meant snubbing an offer to play Superman in a rumoured $100million (£72million) three- picture deal. Josh, now married to St Trinian’s star Tamsin Egerton, is happy to be living a quieter life as a 42-year-old dad-of- three.

‘The guys who are on top are terrified that someone’s coming up behind them,’ he explained.

‘If that’s your real ambition, to be on top all the time, you’re going to spend your whole life looking over your shoulder.

Superman’s cape was eventually snapped up by Henry Cavill, and Josh added: ‘At the time, it was so obvious to me to turn it down. I was being offered movies by the very top directors. And Superman was a risk. Yes, there was a lot of money involved but I didn’t think that was the be-all and end-all’.

Showing he has defied time two decades on, in a slick shoot for Mr Porter’s digital magazine The Journal, Josh said: ‘People thought I was crazy for not chasing that brass ring a little harder but I felt completely comfortable being with the people I knew liked me before I was making films.’

So, after meeting the 32-year-old British actress nine years ago, he shipped out to Minneapolis — the state where he was born. They also have a UK home — in Surrey.

‘I decided to have a life. To put that first. That was always my goal,’ said Josh, who revealed only this week that the couple have a third child, thought to have been born in 2019.

‘I feel very strongly about friends I’ve known for a long time and my family. I wanted to make sure I wasn’t losing those relationships. Those people make me who I am. I put those concerns ahead of chasing a Hollywood dream.

‘The thing I am most proud of is that I’m a father-of-three. I’m still able to do good work and, as I’ve got older, the characters have become more interesting.’

Read the full interview at mrporter.com/journal.

You must be rolling in cash for Adele pad

Someone Like You could live it up in a ten-bedroom mansion once owned by Adele… but you’ll need £6.5million.

The 32-year-old, one of the UK’s wealthiest music stars, moved into the property in Horsham, West Sussex, in 2012 with her then hubby Simon Konecki and son Angelo.

Although she moved out of Lock House the following year, Adele happily gave TV host Anderson Cooper a guided tour on his US show 60 Minutes.

The Victorian property has five reception rooms, seven en-suite bedrooms, a three-bedroom cottage, indoor and outdoor swimming pools, tennis courts and a helicopter pad. Returning to single life following her divorce in 2019, Adele now splits her time between homes in LA and London.

Drake fans have been left gutted after his knee surgery deprived them of a hyped new album.

The hip hop megastar was set to drop Certified Lover Boy before February but decided to push back the release because all his ‘energy’ went into recovering from the operation he had last year.

Drizzy, 34, wrote on his Instagram Story: ‘I was planning to release my album this month but between surgery and rehab my energy has been dedicated to recovery.

‘I’m blessed to be back on my feet feeling great and focused on the album, but CLB won’t be dropping in January.’

The Grammy winner said he was ‘looking forward to sharing it with you all’ later in the year.

Drake, who has released the lead single Laugh Now Cry Later — featuring Lil Durk — previously admitted he expected some people to dislike his new record, just as they did 2016’s Views. ‘They hated on Views just like they will CLB but it’s music to evolve to,’ he insisted.

He also shared how the lockdown had allowed him to spend more time on the LP.

‘God has us all inside the house right now sitting down, so the amount of focus I’m able to put into this album is probably way different than it would’ve been,’ he admitted.

Olly: Euphoric tunes, but we won’t go back Years & Years

Olly Alexander is doubling up his workload. Following his acting stint in TV’s It’s A Sin, his band Years & Years are going back to their dancing roots with an album of floor-fillers.

Olly revealed he and bandmates Mikey Goldsworthy and Emre Turkmen shelved an entire record when the pandemic hit because they wanted their follow-up to 2018’s Palo Santo to be more uplifting.

The drama, in which Olly plays Ritchie Tozer, made him want to create some ‘euphoric dance tunes’.

He told NME: ‘Although I don’t think it’s going to sound ’80s, I’m trying to channel that energy and dance floor transcendence.’

Perrie Edwards has revealed the nickname she earned at school for her refusal to kiss the lads.

The Little Mix siren confessed: ‘I used to get called “virgin lips”. So many boys used to break up with me because they used to tell each other, “Don’t get with her, she won’t even kiss you or anything, she’ll only hold your hand.”’

Perrie, 27, — now dating footballer Alex Oxlade-Chamberlain — said: ‘I was like 15 and I’d never kissed anybody before.’ She told Apple Music 1 her first smooch was with a boy called Connor, adding: ‘I remember it being so magical.’ 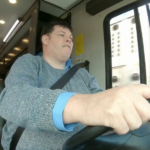 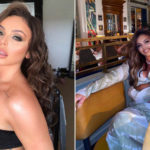