Kara Tointon has welcomed her second baby with her fiancé Marcus Jensen.

The 37-year-old confirmed that she had given birth to a baby boy on Friday, with the tot weighing just over seven pounds.

The former EastEnders star told Hello!: ‘Our second bundle of joy arrived on Friday 8th January at 9.46 am weighing 7.25 pounds.

‘Couldn’t be more excited to start 2021 with this incredibly cool little man joining our family. Thank you to the amazing team at Chelsea & Westminster Hospital for bringing him into the world safely.’

Kara has yet to reveal her son’s name.

Kara and Marius welcomed their first son, Frey, in November 2018.

It seems Frey is excited to be a big brother, as Kara recently shared adorable pictures of the toddler kissing her bump.

The actress confirmed her pregnancy in October, and admitted that she became pregnant quicker than she expected after she and Marius decided to have another baby.

The former Strictly Come Dancing winner told Hello!: ‘I think this year has brought so many things in different ways. At the beginning of the year I was due to start a play, and now I am at home in a little cocoon and pregnant.

‘We really wanted a sibling for Frey. So we said: “If it happens, it happens; let’s go with the flow,” and it happened much quicker than we expected. I did the test in May. We weren’t shocked but it was a surprise, and we feel so lucky.’

She added that she was excited for Frey to have a brother, noting how close she and her sister Hannah, who appeared in The Inbetweeners, were growing up.

Kara and Marius were due to get married this year, but their wedding has been put on hold due to the coronavirus pandemic.

However, the actress is happy to wait until they can celebrate with their families.

Kara became engaged to her Norwegian boyfriend while expecting Frey.

Prior to her relationship with Marius, Kara dated her Strictly parter Artem Chigvintsev for four years; the dancer has since had a baby boy with wrestler Nikki Bella. 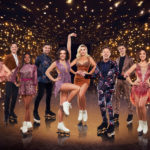 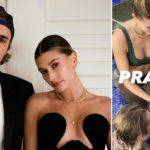 ‘Friends wouldn’t have been the same without you:’ Jennifer Aniston and Courteney Cox lead tributes to Gunther actor James Michael...