Kate Beckinsale shared one of the cruel messages she had found in her DMs from a troll, brilliantly shutting down the hater in the process.

The actress, 47, shared the vile message she’d received – but pointed out that the troll had kind of ruined the impact of their message thanks to a typo.

The message read: ‘I hope you and your stupid little cat drive off a cliff and die you dumb Hollywood liberal b***h.

‘I truly hope the very very worst happens to you and I will visit your grave to puss on it. Be careful what you wish for you stupid c**t. You’ll get yours.’

Kate shared a screenshot of the message, telling her followers: ‘I’m only posting this because the typo of “puss” has oddly pleased me as it sort of negates the I hope your cat dies in a car accident theme’.

She also shared a message one of her followers had sent on her Instagram story, in which they had photoshopped her and her cat’s faces onto Thelma and Louise.

They joked: ‘I know the troll didn’t pitch it well but this is the remake we didn’t know we needed.’

Kate and her cat, Clive, have been keeping fans amused during the pandemic with regular updates, and it doesn’t look like the troll is going to stop the quality cat content any time soon.

The long-haired cat has modelled a series of incredible outfits and accessories on Kate’s Instagram, most recently appearing in a kitty-sized tuxedo top.

Kate joked of his snazzy ensemble: ‘Panicked a bit he was going to whip out a cello but it was just fashion.’

Before Christmas she had also shared a video of how much Clive enjoys their dress-up sessions, writing: ‘Demonstrating the essential difference between characterful eyebrows and simmering vengeful rage – see also #eugenelevy.’

She added: ‘Just having to do this because people think you’re suffering when you’re not. You don’t mind a hat, do you?’

Showing Clive sitting patiently while she popped a jazzy Christmas bonnet on his head, Kate added: ‘See, he doesn’t mind – he’s quite game for an outfit. There’s no screaming and shouting.’ 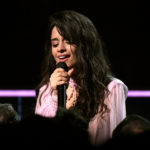 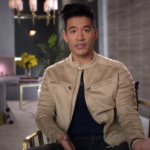