Katie Price has promised that her singing career is far from over and she’s even bought a home studio – but boyfriend Carl Woods is not a fan of her voice.

The former glamour model, 42, has revealed she’s bought herself a studio kit for her YouTube videos but is planning to record acoustic covers with it too.

She told FUBAR Radio’s Bobby Norris and Stephen Leng on Access All Areas: ‘Obviously I muck about on Instagram. And when I say I want to be on The Masked [Singer], I want to be on The Voice, then everyone takes the mickey out of me saying, “oh shut up Kate. You really think you can sing?”

Katie, who previously tried out for Eurovision and released an album with ex Peter Andre, often shares videos on her Instagram stories of her boyfriend, Carl Woods, taking the mickey out of her singing voice and he just so happened to walk into the room at the right point.

She said: ‘Carl’s just walked into the room. Do you think I can sing?’, to which Carl replied: ‘Absolutely not!’ Katie laughed: ‘See what I mean?!’

Katie added: ‘I’ve now bought myself a studio for YouTube. So I’m going to do my like karaoke versions, acoustic versions of songs I want to do.

As well as singing, and her recent documentary about life with her son called Harvey and Me, Katie is also starting her own podcast.

She explained what her fans could expect: ‘The first one, I’m going to talk with Anna Kennedy. She was on my show, all about disabilities and stuff.

‘So many people have written me letters wanting help or answers, so I’m going to do one around that, reading letters and getting in contact with them people to see what I can help or discuss their letters because I think it’s good for people to know I do receive their letters.

‘Obviously I can’t read everything, but I try my best just to acknowledge it because I don’t know everything, but at least I can help and pass on what I know or try and guide them in the right way.’

Katie’s mum Amy, who is currently battling the terminal lung condition Idiopathic Pulmonary Fibrosis, will also appear on one episode.

She explained: ‘It’s a chance for her to talk about what people will relate to; Covid, not seeing your loved ones, how she feels about Harvey. She hasn’t seen him.

‘And obviously her IPF, what it’s like going through that and just a bit with people who’ve gone through the lung stuff… So that’s the catch up with my mum and then the list goes on.’

You can listen to the full interview with Katie on Thursday, February 4 on Access All Areas at 6pm via fubarradio.com. 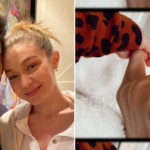 Gigi Hadid says she didn’t even realize she’d given birth after 14-hour labor: ‘I was like an animal woman’ 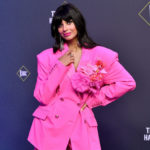 Jameela Jamil ‘lost all her money aged 30’ from lack of education, mental illness and being overly generous