Kim Kardashian’s popularity is showing no signs of waning as the reality star has just reached 200 million followers on Instagram.

The Keeping Up With the Kardashians star appears to have hit the mark this weekend but she’s yet to acknowledge the milestone.

It means Kim, 40, is now the second most popular member of her family on the app after younger sister Kylie Jenner, who currently boasts 210 million followers.

Supermodel Kendall Jenner has 148 million fans keeping up with her every move while Khloe Kardashian is next up with 127 million. Kourtney Kardashian recently celebrated the 100 million milestone and currently has 107 million followers.

Kim still has some way to go to catch-up with the other most-followed celebrities on Instagram with footballer Cristiano Ronaldo amassing a staggering 255 million followers, Ariana Grande with 216 million and Dwayne Johnson aka The Rock sitting pretty with 212 million.

It will no doubt be welcome news for Kim who is reportedly facing a divorce from husband Kanye West.

The couple’s marriage is said to be on the rocks six years after they tied the knot, following a string of controversies over the past year.

Kanye, 43, rocked the boat when he announced his run for presidency last summer. The Gold Digger rapper then held a campaign rally where he revealed how he and Kim considered aborting their eldest daughter North.

Kim later released a statement explaining that Kanye was battling mental health issues but that she would be standing by him.

However, sources claim Kim has had enough and is biding her time to file divorce papers.

Insiders say the KKW Beauty founder is worried about how the split will affect their four children; North, seven, Saint, five, Chicago, three, and Psalm, one.

The source told People: ‘The children are very important to Kim. She is worried about what a permanent split will be like for all of them concerning their well being.

‘She is asking others for advice on how to do this. But for the past few months and even longer, trying to be a normal family has been challenging and frustrating. She wants to move on.’

Over the weekend, Kim celebrated her daughter Chicago’s third birthday with a lavish party at the family home. 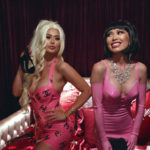