The reality star announced the news of her son’s arrival on Instagram and posted a picture as she held him in her arms.

‘Sending all my love to all the other mommas to be out there in lockdown.. the best experience ever will never forget this day.’ (sic)

She wrote on Instagram: ‘Little bubba can’t believe you are going to be ours.

‘Me and Sammy are so excited to start this next chapter in our lives, feel so lucky and grateful.. 2021.’

The reality TV star, who is the daughter of EastEnders actor Danny Dyer, shared pictures of her and Sammy holding up their baby scan.

Dani, 24, opened up about finding the first stages of pregnancy tough as she battled carb cravings.

‘Apparently at this stage I’m supposed to feel ‘on top of the world’ which I really hope for as the first few months have been really hard’, confessed.

‘I’ve had loads of messages from people so thought I’d share my experience so far.’

Detailing her ‘horrendous migraines’ she went on: ‘I’ve been lucky with not being physically sick. But I’ve [definitely] suffered with the nausea, always being tired but waking up at stupid times and horrendous migraines (I will definitely be trying out all the new things people have recommended me so Thankyou).’

Halfway through her pregnancy, the young mum confessed she had become superstitious since falling pregnant, feeling anxious whenever she saw a magpie.

The TV star also revealed she was always ‘finding new things to worry about’.

She credited the app Peanut for connecting her with other mums to share advice and concerns.

‘Social media can paint a picture that being pregnant is so easy but the reality is it can be really tiring and hard sometimes. I’ve suffered from severe migraines, tiredness and I started going off so many foods when I first fell pregnant,’ the new mum said on Instagram.

‘I absolutely love being pregnant but it’s a constant battle of wanting everything to be perfect and for my baby to be healthy,’ she added.

Dani and Sammy have been dating for just over a year after rekindling their romance in May 2019.

The pair were together before she entered the Love Island villa in 2018 but patched things up after she and Jack split. 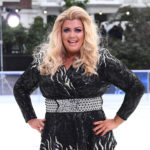 Dancing On Ice: Viewers hail ‘iconic’ Gemma Collins as she returns to the show 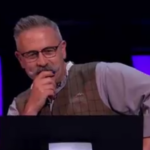 Who Wants To Be A Millionaire?: Contestant swears as Jeremy Clarkson tells him he’s lost £16K