Marie Kondo has revealed she is pregnant again.

The organising guru, 36, is expecting her third child with husband Takumi Kawahara and announced the news on Instagram by debuting her baby bump.

Marie, who is the star of Netflix series Tidying Up, was seen cutely looking down at her bump and holding it in her hands in her big reveal.

She captioned her post: ‘I have some news! Another bundle of joy on the way. ?’

Marie was inundated with congratulatory messages, with her celebrity pals coming out in full force to send her their well wishes.

Miranda Kerr commented on Marie’s post: ‘So happy for you and your family ? Congratulations ?,’ while Drew Barrymore wrote: ‘CONGRATULATIONS!!!!! I am wishing you so much joy! And health and love!!!!!!!!!’

Marie is already mum to two daughters, Satsuki and Miko she shares with Takumi.

Opening up on motherhood, Marie previously joked that having kids around has led to her letting go of being such a perfectionist when it comes to keeping things tidy.

She may be known for being the queen of organisation and reducing clutter, but Marie admitted: ‘I used to be a perfectionist, but it became difficult to maintain that standard after having my children – so much was out of my control.

Insisting she’s eased up on her impossible standards, Marie teased: ‘I gave up on perfectionism a while ago.’

The star revealed that while her kids don’t necessarily share her love for tidying up and won’t do so on their own, she’s keen to get them into good practice.

‘They will [tidy up] when I ask them to,’ she revealed. ‘We make it a daily practice and tidy together at the end of day.’

Marie is famed for her use of the KonMari method when it comes to getting the house organised and it involves placing everything into categories and then getting rid of all the things that don’t spark joy, before finding a place for the things that are being kept.

She shares her expertise in her Netflix series, which dropped on the streaming platform in 2019, and earned her an Emmy nod for the outstanding host for a reality or competition program award.

In 2015, Marie was listed as one of Time’s 100 most influential people and not only found herself at the centre of plenty ‘I love mess’ memes, but her show also led to an increase in donations to charity shops as people de-cluttered their homes after being left inspired. 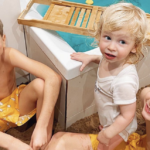