Miley Cyrus has been unveiled as the new ‘Mbassador’ for Magnum (Picture: Magnum)

Miley Cyrus has opened up about her biggest failures and the expectations thrown at her, as she unveiled a stunning new campaign for Magnum.

The Wrecking Ball singer, 28, is the latest ‘Mbassador’ for the brand, showcasing their new layered ice creams.

Ice cream and Miley Cyrus? What more could we possibly want?

She was spotted tucking into a selection of tasty desserts in the black-and-white photoshoot, rocking her iconic blonde mullet, a black crop top and polkadot trousers.

Appearing in an intimate Q&A session to celebrate the project, she spoke candidly about growing up in the spotlight, as well as how she has embraced her very own layers in her private life.

‘A way that I embrace all the different sides of myself and my pleasures is that I am not afraid of failure because I think by having these layers, a lot of the time, it encourages you to be experimental because you aren’t just one thing,’ she said. Miley got her fill of sweet treats in a stunning black-and-white photoshoot (Picture: Magnum)

‘Just being able to fail and to say that I tried and to experiment and go, that fits, this doesn’t. Confronting every layer that you have and giving it a chance to breathe life into that side of yourself, and going, okay, this feels authentic, this doesn’t…

‘That’s kind of what our purpose is, is to dig inside and find all these different cool textures and colours that we have within ourselves and to let them come out and to just kind of know who you really are.’

Miley has lived her life in the public eye from a very young age, fronting Disney’s Hannah Montana series when she was just 13-years-old – and she has remained a permanent fixture in the industry ever since.

However, she revealed that this position comes with huge expectations, as people expect her to be ‘superhuman’ at all times – something that has encouraged her to just embrace feeling ‘human’.

‘All those things remind you that you’re human. Especially with what I do, sometimes I think people expect me to be superhuman, to not be afraid, to be able to perform in front of thousands of people without fear. That’s just not being a human being.

‘The message of Pleasure Has More Than One Layer means to me that there’s been times in my life that I feel that I can be very contradictory to myself,’ she said of the Magnum campaign.

‘Sometimes I’ll go on stage and I’ve done it a million times and it feels that way. Sometimes it feels as terrifying as the first time; and just accepting every part of who I am and that kind of human experience that I’m having because even things that I’ve done a million times, sometimes they still feel new.

‘Sometimes I feel like I want to be that centre of attention. Sometimes I want to hide in the corner. Just knowing that every day is different than my experience, to what is happening in my life.

Because she doesn’t do anything by halves, Miley is also blessing us all with an ‘immersive 8D performance’ on June 10 to commemorate the campaign.

Fans will be able to take in the action on YouTube, as well as Magnum’s official Instagram page – and limited edition headphones are also up for grabs so you can take in the performance in total style. 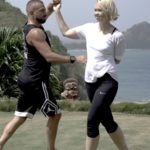