The 37-year-old is expecting her third child with former Backstreet Boys star Nick, following a number of miscarriages over the years, and has said that at first she thought she was ill with a tumor.

Lauren shared her pregnancy news in an interview with People magazine, admitting that she was shocked to learn she was with child, as she believed there was no way she’d fall pregnant again.

In fact, Lauren passed off her pregnancy as a tumour, as she had no indication she was pregnant until five-and-a-half months gone.

Lauren said: ‘One day I just, I felt something move in my body and I said, “Nick, there’s something not right. I think I need to go to the doctor. Something’s wrong with me.” I was not supposed to be able to have any more children, so I never assumed that I was pregnant.’

So convinced that she couldn’t be pregnant, Lauren, reflecting on her medical history and previous pregnancies, said: ‘I thought I had a tumour because there was just no way that I could be pregnant.’

She and Nick had even spoken about potentially looking into surrogacy as an option to expand their family, with the singer telling the publication their third child is a ‘blessing’.

It comes after Lauren had multiple miscarriage, with Nick’s wife revealing her last miscarriage was a ‘second-term loss’ which she described as ‘more traumatic’.

She also praised Chrissy Teigen – who lost her baby boy named Jack at 20-weeks gone – for sharing her experience so openly and so in depth on social media.

Chrissy had posted photos from her hospital bed and is often seen reflecting on her grief for her son with her follows, something which Lauren says she is ‘grateful’ for, as it will hopefully help more people talk about miscarriage.

Lauren said that she has had three miscarriages, but feels falling pregnant again with her third child is like ‘all my children have come back to me’.

Nick has since shared news of their pregnancy with fans. He uploaded a video from a recent baby scan of the pair’s unborn baby and captioned it: ‘Sometimes life blesses you with little surprises. #2021 #babynumber3 #fatherhood #happyhome.’

He and Lauren are already parents to two children; son Odin, four, and daughter Saoirse, one, who they welcomed in October 2019.

The couple tied the knot in Santa Barbara, California in April 2014, just over a year after Nick had popped the question. He and Lauren reportedly first met at a party at his house in 2008. 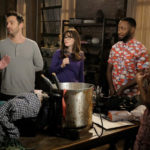