Olivia Munn has used her platform to speak out about the rise in hate crimes against the Asian community in America amid the coronavirus pandemic.

The X Men: Apocalypse actress shared her outrage on Instagram on Wednesday, as she posted a lengthy message to highlight the issue.

‘Over the past few days I’ve found myself at a loss for words at the rise of anti-Asian hate crimes,’ the 40-year-old began. ‘The racist, verbal, and physical assaults have left my community fearful to step outside.’

The Predator star then highlighted the story of individuals who have been victims of these crimes, including a 91-year-old Asian American man who was attacked, a 64-year-old Vietnamese American woman who was assaulted, a Filipino man who was ‘slashed’ in Manhattan, and an 84-year-old Thai American who was murdered.

The actress continued: ‘To simply exist as a minority in this country is seen as a protest to some.

Fellow Asian American actress, Ally Maki, was one of many who thanked the star fir speaking out as she wrote: ‘Love you sis. Thank you for always being a leader in our community.’

A UN report released last August revealed there were more than 1,800 racist incidents against Asian Americans in the US over an eight-week period from March to May 2020. 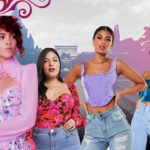 Bruce Springsteen ‘arrested for driving while intoxicated in November’