Halsey reflected on her struggle with endometriosis, after revealing she is pregnant with her first child.

The popstar announced this week that she is expecting a baby with artist Alev Aydin, proudly showing off her growing bump on Instagram.

It’s been a tough road to pregnancy for the Without Me singer, who underwent surgery in 2017 for severe endometriosis.

Halsey, real name Ashley Frangipane, shared a photograph of her bump on her Instagram stories, and drew arrows to faint scars on her belly.

She wrote: ‘The scars that got me this angel’, adding the hashtag ‘#endowarrior’.

Three years ago, Halsey had ‘multiple’ surgeries to treat her endometriosis – a condition where tissue similar to the lining of the womb grows in other places, like the ovaries and fallopian tubes.

Sharing a picture from her hospital bed, she wrote on social media: ‘Today I braved multiple terrifying surgeries. The most important of which being the surgery that would hopefully treat my endometriosis. For those of you who have followed this battle of mine or who may suffer with it yourself, you know the extremes to which it can be mentally exhausting and physically painful.

‘OK HONESTLY I’m in total agony right now (and I’m going to be in excruciating pain for a while cause I had quite the cocktail of procedures today). But in my recovery I am thinking of all of you and how you give me the strength and stamina to power through and prosper.

‘If you suffer from chronic pain or a debilitating disease please know that I have found time to live a crazy, wild, rewarding life AND balance my treatment and I hope so much in my heart that you can too.’

In 2019, she revealed that a doctor told her the surgery had been so effective that she may not have to freeze her eggs, with Halsey telling Rolling Stone: ‘I was like, “Wait, what did you just say? Did you just say I can have kids?”

‘It was like the reverse of finding out you have a terminal illness. I called my mom, crying.’

As well as being unsure as to whether her endometriosis would stop her conceiving in the future, the Closer singer suffered multiple miscarriages in the past – one of which occurred on stage.

Speaking on The Doctors, the 26-year-old said: ‘I was on tour, and I found out I was pregnant. ‘Before I could really figure out what that meant to me and what that meant for my future… the next thing I knew I was on stage miscarrying in the middle of my concert.

‘The sensation of looking a couple hundred teenagers in the face while you’re bleeding through your clothes and still having to do the show, and realising in that moment… I never want to make that choice ever again of doing what I love or not being able to because of this disease.’

It is unclear how long Halsey and Alev have been dating, although they were pictured picking up paint supplies together in October 2020.

Considering that bump, we’re guessing their relationship has been longer than three months – and the pair have been friends for longer than that, as they attended a Lakers game together in January 2019.

Alev, 37, is a producer, actor and screenwriter, and created and produced the 2017 series Small Shots.

Before Alev, Halsey was in relationships with stars including Evan Peters, Yungblud and G-Eazy. 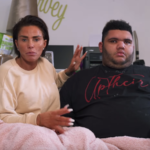