Kate Lawler has assured fans she hasn’t gone into early labour, after fans were left concerned following her absence on social media.

The former Big Brother winner, 40, is expecting her first child with fiancé Martin and she is due to give birth this month.

Since announcing their exciting baby news, Kate has been keeping fans up to date with her pregnancy and her baby bump progress on social media.

Noticing that she had gone a bit quiet on Instagram over the weekend, it sounds like Kate’s followers had got in touch to check on the star, with some wondering whether she had gone into labour.

Assuring fans that everything is ok, Kate shared a statement to her story on Tuesday night that read: ‘Evening all. Had lots of messages asking if I was okay and some of you thought I’d gone into early labour. I’m fine.’

Kate explained that her absence was down to nothing more than a busy weekend, as she continued: ‘It was a full-on Friday with my last radio show, followed by filming Friday night, all day Saturday and podcasting Sunday.

‘I also ended up having a busy Monday/Tuesday and not felt 100% today, but tomorrow is a new day. Thank you for caring. Hope you’re all ok. Sending lots of love.’

It comes as Kate was joined by partner Martin and I’m A Celebrity winner Giovanna Fletcher for the latest episode of her Maybe Baby podcast, where she opened up about embracing her body during pregnancy.

Kate said that she ‘loves’ how her body has changed while she is expecting and revealed: ‘I’ve really embraced the changes in my body. It’s the biggest I’ve been and I love it.’

‘I even love my massive areolas and the fact my nipples look like cigarette butts,’ Kate joked. ‘I do love it.’

She also addressed the idea of heading straight back to the gym after giving birth and insisted women have ‘progressed’ to celebrate their bodies more post-baby rather than striving to bounce back.

Kate said: ‘I think we’ve progressed in terms of how women behave on social media and behave after their pregnancy. I see more and more women celebrate their bodies not looking as they were, even six months after having their baby.’

As the Virgin Radio host prepares to give birth, Kate has shared her concerns over having to give birth alone during lockdown.

Kate voiced her fears when the government announced the UK was back in a national lockdown last month. She got emotional as she told fans: ‘I’ve just got off the phone to my obstetrician, we were talking about the birth and my birth has been booked in for six weeks today.

‘But because Covid cases are on the rise, there’s a chance that Boj [Martin] might not be able to come to hospital with me.’

She said: ‘I might have to go it alone, so first of all my heart goes out to any woman who had to give birth without her partner there. As someone who has a huge fear of childbirth, the idea of giving birth to my baby alone without the person I love there holding my hand is just terrifying.

‘It’s just not for me, it’s not what I want so of course I’m upset but there’s nothing we can do.’

NHS guidance states that currently you are allowed a birthing present as long as they do not have any symptoms of Covid 19. It adds that ‘there may be limits’ on the amount of time that person is allowed to stay for following the birth.

Kate confirmed her pregnancy news in September last year and revealed that she now ‘feels ready’ to have a child, after previously deciding against having kids. 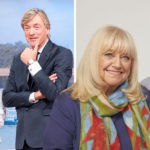 Since Following These Simple Rules, My Skin Has Never Been Better