Rachel Riley has won a libel battle against Mike Sivier, a political blogger and Jeremy Corbyn supporter, over an article which alleged she engaged in a ‘campaign of online abuse and harassment; against a teenager on Twitter.

The Countdown star, 35, sued Sivier over the article on his website Vox Political in January 2019, which had the headline: ‘Serial abuser Rachel Riley to receive “extra protection” – on grounds that she is receiving abuse.’

Sivier had argued the article was ‘substantially true’ after it was found to mean that Riley had ‘engaged upon, supported and encouraged a campaign of online abuse and harassment of a 16-year-old girl’ in Twitter exchanges that took place in December 2018 and January 2019.

The court ruled in Riley’s favour with Mrs Justice Collins Rice concluding Sivier’s defence had no prospect; of succeeding at a libel trial.

The allegation had centred on tweets from an online debate on anti-Semitism in the Labour Party, some of which were between Riley and a Twitter user who identified herself as a 16-year-old called Rose.

The judge ruled that Riley’s exchange with Rose was a ‘straightforward, rational and respectful exchange of views’ and that there was no evidence the presenter had encouraged any of her 600,000 followers to harass Rose, nor was she responsible for any abuse the teenager received.

Justice Rice said: ‘Rose challenged Ms Riley to engage with her and thanked her for her response.

‘Third parties appear to have made mischief in the wake of that engagement, and Rose herself publicised a narrative that she was the victim of bullying for which Ms Riley’s “gang” was to blame.

‘Mr Sivier’s website article said this was fact, and he seeks now to defend that by showing Ms Riley’s speech and “deliberate and calculated omissions” were responsible.

‘There is no arguable source for that responsibility in law or fact; and it is a still further leap to the truth of an allegation of deliberately supporting and encouraging a campaign of abuse and harassment.

‘I do not see an argument from Ms Riley’s alleged omissions realistically capable of supporting that allegation.

‘For all these reasons, I have not been able to discern in Mr Sivier’s pleadings a case, arguable with a realistic prospect of success, that it is substantially true that Ms Riley engaged upon, supported and encouraged a campaign of online abuse and harassment of Rose.

‘That itself precludes the possibility of arguing that any such conduct incited others to make death threats to Rose.

‘If such threats were made there is no basis for saying they were incited by Ms Riley’s conduct as alleged, since there is no arguable basis for establishing the objective fact of that course of conduct.’

She added that Twitter was ‘a haunt of trolls’, which ‘the vulnerable enter at great personal peril,’ though that does ‘not excuse’ online harassment.

Sivier has said in a post on his website that he intends to appeal against the decision and asked his supporters to fund the legal challenge. 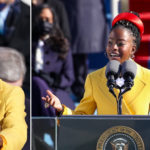 A star is born: Who is Amanda Gorman after her inauguration reading?