Ryan Reynolds and Rob McElhenney have officially completed the takeover of Wrexham AFC.

The Deadpool favourite, 44, and and It’s Always Sunny In Philadelphia star, 43, became the new owners of the Welsh football club last November, when the move was approved by the club’s Supporters Trust.

All the paperwork has now gone through and been approved, with the Hollywood pair already getting down to business.

In fact, Sky News states they have already invested £2million into the club – and made the funds available immediately.

In a joint statement, Ryan and Rob told fans: ‘It is a special day for the two of us to become the latest stewards in the long and storied history of Wrexham AFC.

‘Together with the players, the staff, the fans, and the local community, we can now pursue our goal to grow the team and return it to the EFL in front of increased attendances, and in an improved stadium, while making a positive difference to the wider community in Wrexham.

‘Wrexham AFC is only in a position to thrive because of the incredible efforts of the Wrexham Supporters Trust.

‘Their members are a fitting reflection of the integrity and spirit of the town and they will always have an important role at the club.’

The new owners also vowed to protect the heritage of Wrexham AFC, while also growing the exposure of the club around the world and creating a winning culture.

‘2020 was a difficult year and there are likely to be further public health challenges in the months ahead,’ they added. ‘But we hope to be cheering the team on from the stands as soon as it’s safe to do so in 2021.’

Rob shared a snap of himself and the Proposal actor separately toasting the news with a bottle of Ryan’s gin brand – which was embossed with the Wrexham logo.

In true Rob style, he teased that he would be making a personal change to go with their new venture.

‘The @Wrexham_AFC handover is complete,’ he captioned the Instagram upload.

‘We’re toasting with a limited-edition bottle of @AviationGin and I am rebranding as Wrob.

‘Both of which I am apparently legally obligated to do as I’ve been informed Ryan now owns my life rights. My lawyer is currently looking into it.’

While Ryan shared a snap of himself kitted out in a Wrexham hoodie, with the message: ‘And away we go…’

Football legend David Beckham was on hand to introduce the stars to the game on Instagram.

Sliding into the comments under Ryan’s post, he penned: ‘Welcome to the most beautiful game in the world.’ 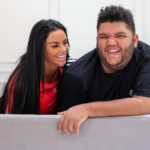