Scarlett Moffatt has opened up on her hopes of having children in the future and revealed she’s ‘always wanted to adopt’.

The former Gogglebox star, 30, is currently loved-up with boyfriend Scott Dobinson and she was quizzed by fans on when she hopes to settle down with her man.

One fan asked Scarlett if she would like children, with the reality star revealing that she is hoping to start a family in a ‘few years’ time.

Responding via her Instagram story, Scarlett explained that ever since she was little, she’s always considered adopting.

She said: ‘One day maybe in a few years. However that may be. Ever since I was a kid I’ve always wanted to adopt as I think every child deserves a loving home.’

During her Q&A, Scarlett revealed that she and Scott are hoping to move into their new house in March.

It seems the couple are ticking off big relationship milestones lately, with Scarlett recently stating that she is keen for Scott to propose.

Speaking on her Scarlett Moffatt Wants To Believe podcast, the former I’m A Celebrity star revealed what kind of wedding she would like and told listeners she is leaning more towards eloping with her partner.

‘I’ve always, always wanted a massive wedding – now I keep saying, “Let’s go to Vegas.” I’m not actually engaged yet, but I assume he’s going to do it at some point.’

Scarlett and Scott have been dating for over two years, with the star crediting 2020 for bringing her ‘closer’ to her boyfriend.

As she reflected on the year just gone at the end of December, Scarlett paid tribute to Scott in a sweet message on Instagram. She told fans: ‘2020 can’t wait to tell you to… well in a nutshell eff off! The one thing that 2020 has brought me is closer to this man @scottdobby ❤️.

‘I always think of myself as independent, strong willed and a feminist. But that doesn’t mean that I can’t say from the bottom of my heart thank you for helping me get through this year.’

She continued: ‘This has been the worst year for so many different reasons, But 2021 gives us the opportunity to start a new chapter in our life. I know to some it’s just a date change but for me and many others it’s that feeling of new beginnings. I know what I’m taking with me into 2021 and what I’m leaving behind in 2020.

Scarlett and policeman Scott first got together when she slid into his DMs, after finding him fit when enlisting his help over a 999 call.

‘I had a weird pap who was trying to take photos inside my house so I rang the local police station. Scott came to the house to deal with that,’ she told The Mirror.

‘My friend was in the house with me at the time and I was like, “He’s so fit, I really fancy him.” So I commented on a picture of him and his dog Toby and put, “Ah, cute… and the dog.” I’d had a couple of drinks.’

Luckily for her, Scott replied the next day and they’ve been a thing ever since. 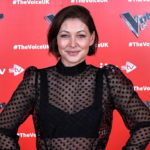 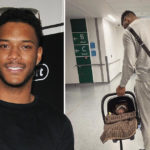 Love Island star Theo Campbell reveals he has welcomed a baby boy in shock announcement: ‘Keeping this private has been so nice’