Kylie Jenner has been trolled to within an inch of her lip kits this week over the shower in her multi-million-dollar mansion.

This comes not too long after her big sister Kim Kardashian was similarly roasted for her own soulless bathroom, which begs the question – what on Earth does this family think is an acceptably-functional place of bathing?

It all went down when beauty entrepreneur and reality star Kylie was sharing a tour of her wet room over the weekend when she shared a snapshot from her shower.

But…but, it’s the water pressure for us.

Coming out of the shower head was the saddest little spurt of water that was lacking in the pressure department so much so that even a Chihuahua would go, ‘oi, is that it?’

For someone who was once touted as a billionaire and who owns such an imrpessve pile – reported to be worth $36million (£26m) – you have to wonder how she doesn’t have the most powerful jet in all the land.

Fans were utterly living for the moment to feel a bit better about themselves and their current plight, surprised that it was shower pressure that finally helped them relate to the uber rich celebrity.

One wondered on Twitter: ‘Why is nobody talking about how sh*te Kylie Jenner’s shower is? The water pressure AND the size of the shower head. Someone get that gal a plumber pronto.’

As another asked for those who have better shower pressure to re-tweet them, one wrote: ‘Something about having better water pressure than Kylie Jenner gives me a little hope.’

And one simply wrote a whole heap of truth: ‘Everyday y’all ask why the kardashians are still relevant yet y’all make sh*t like kylie jenner’s water pressure trend.’

Should Kylie want to upgrade that low flow, she’s got enough bank behind her, after the star came in at #29 on Forbes’ 2020 list of richest self-made women, with a reported net worth of $700m (£516m). 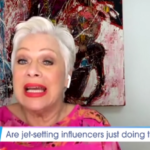 Denise Welch defends Love Island stars partying in Dubai as UK remains in lockdown: ‘They may have a mortgage to pay’