YouTube star Abigail Thorn, also known as Philosophy Tube, has come out as transgender, explaining that she would like to be referred to by her new name and with she/her pronouns.

Abigail, who boasts a following of more than 800,000, announced the news in a statement on Twitter, and has since received an outpouring of love from friends and fans.

Sharing an updated photo of herself, she wrote: ‘Hello friends! I’m delighted to say I’m a trans woman; my name is Abigail and you can refer to me with she/her [pronouns].

‘Thank you to everyone who kept my secret for such a long time as I prepared to come out publicly! I’m excited to continue my acting career and Philosophy Tube. Please respect my privacy and treat everyone with kindness and patience, even those who don’t treat me kindly.

‘It’s lovely to finally relax, to sleep well with sweet dreams and be at home in myself! But I’m also scared. Things are very, very bad for trans people in the UK and they’re getting worse.

‘My existing following means I have now instantly become one of the most recognisable transgender people in the country and I feel an enormous pressure to be “good at it” like if I could only be clever enough, or pretty or funny or articulate enough, things would magically come right! Alas. I can’t be a perfect paragon of trans Britain. I’m only an actress but I can relay the following facts’.

Abigail went on to point out that trans people have been around as long as Britain has, or even longer, but they still face huge challenges and awful discrimination, including from the National Health Service.

She explained that if a cisgender woman wants to get hormone replacement therapy, she can do through her GP, but a trans woman needing it to transition has to travel to a separate clinic and be ‘interrogated’ by psychiatrists.

The actress and YouTube star referenced the long waiting lists (often several years long) for transgender people to gain access to gender identity clinics, and the long waits for top surgery and breast reductions, which cisgender women can often get for back pain.

Abigail continued her statement by saying that transgender people don’t have equal legal rights either – while cisgender people can use their passport as a proof of ID when they get married or adopt children, she said she would have to ‘beg for the government’s permission to become a wife or a mother’, despite her passport having a female gender marker.

‘There has never been a trans MP, member of the House of Lords, MSP, MS, or MLA,’ she continued. ‘No party has equal rights as a policy goal. Trans people, especially trans people of colour, are hit hardest by unemployment, homelessness and domestic, sexual and police violence, but the conversation always focuses on wealthy white cis women tweeting about toilets.’

Abigail finished her statement by adding her voice to those demanding equal rights for transgender people.

She said trans equality must be ‘part of a huge redistribution of power.’

‘I hope that someday soon people of all ages realise that being trans is perfectly normal. Like all human beings we are inherently valuable and entitled to self-determination, and if that makes others upset then it’s only because they’re choosing not to live in reality,’ she said.

Abigail finished her statement by sending love to trans people in Britain and overseas, ‘especially those who can’t come out – yet!’

‘This above all: to thine own self be true. And it must follow, as the night the day, Thou canst not then be false to any man!’

Fans and friends are thrilled for her, with Daniel Howell writing: ‘The true queen of england,’ while actress Mara Wilson said: ‘MAZEL TOV ABIGAIL.’

The star is best known known for her YouTube channel, which sees her break down philosophical ideas for her viewers. 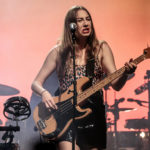 Haim to compose soundtrack for Netflix film The Witch Boy 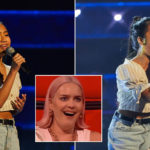 The Voice UK: Viewers in disbelief after judges don’t turn for 16-year-old with ‘superb’ voice