On Thursday, Time published an interview between Amanda Gorman, inaugural poet-turned-fashion star, and former First Lady Michelle Obama, as part of its “The Renaissance Is Black” series, spearheaded by How To Be An Antiracist author Ibram X. Kendi. For the accompanying photos, Gorman posed for two portraits, shot by photographer Awol Erizku — the artist behind Beyoncé’s pregnancy announcement shoot.

In one of Gorman’s portraits, the National Youth Poet Laureate wore a bright yellow, puff-sleeved gown by Greta Constantine. And, from the crown-like Khiry headband paired with her dress to its eye-catching colour, the outfit mirrored the 22-year-old’s Inauguration look. Except, rather than a coat and a padded headband, Gorman wore a gown and a gold necklace as a headpiece.

After Gorman wore the yellow Prada coat and red headband, there was a 1,328% surge in search for “yellow coats” on the fashion search engine Lyst, and a 560% increase in interest for “red headbands.” WWD ran an article following the Inauguration titled, “Why Amanda Gorman Represents a New Kind of Style Icon,” while the NYT investigated why “We Can’t Stop Thinking About Amanda Gorman’s Headband.”

The yellow dress from the Time cover was plucked from Greta Constantine’s spring ‘21 collection by her stylists Jason Bolden and John Mumblo. The other shot featured a high-necked, hot pink gown by celebrity stylist Jason Rembert’s New York-based label Aliétte.

According to Time, Erizku wanted the portrait of Gorman in her Aliétte gown to be an “indirect nod” to Maya Angelou. In the portrait, Gorman is holding a birdcage, a reference to the birdcage ring she wore at the Inauguration — a gift from Oprah — and Angelou’s poem, “I Know Why the Caged Bird Sings,” Erizku told Time. “It needed a layer of depth that only poetry can explain,” he said. During the interview, Gorman and Obama, too, talked about the poet and civil rights activist; like Angelou and President Biden, Gorman has had difficulty with her speech in the past. “I could not say certain sounds, like r, so I would be saying things like poetwee or dolla,” she told Obama. “For a long time, I looked at it as a weakness. Now I really look at it as a strength.”

One of many. In the just over two weeks since Inauguration Day, Gorman has been signed by IMG Models, appeared on Ellen, and been deemed by many (us included!) as one to watch in fashion. Now, she can add an interview with Obama — one featured in Time, no less — to that list. 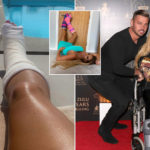