Also released on Thursday were five campaign videos — all shot by Dennis Leupold, Rihanna’s long-time collaborator — highlighting the looks worn by the aforementioned spokespeople. (Husband-and-wife duo Nazanin and Miguel Pimentel co-star in an intimate video together, while the other models appear on their own.) 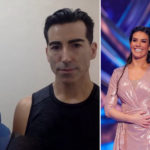 Dancing on Ice 2021: Rebekah Vardy’s dance partner reveals he ‘can’t even hug wife’ due to Covid restrictions while filming

Compatibility Tests: Why Are We So Obsessed?