We all have those pieces of clothing that look great, but are a bit of a nightmare to get on.

One woman spent years wearing a top, never fully understanding how you were supposed to wear it.

And it turns out, it’s because it was actually a playsuit/romper.

Madison McGilliard’s friend posted a video on TikTok, showing the moment she finally discovered she’d been putting both legs through one of the leg holes.

She sent the friend a message saying ‘I have had this top for like OVER 4 YEARS and I am JUST NOW realising that it is NOT a top, it is ROMPER.’

She added pictures showing herself wearing it on Christmas Eve in 2017 and said: ‘It always bugged my how complicated it was to put on and how it never made any sense and now I freaking know why.’

Her friend questioned how she’d made the mistake asking what she’d done with the extra fabric from the other leg.

Madison responded that she thought it was ‘one of those flowly side-swept tops.’

To give her friend a better glimpse of what the playsuit should look like, she added a picture of her wearing it with a leg in each hole, after she’d finally figured it out.

The TikTok video of the message exchange quickly gained thousands of views, prompting Madison to set up her own account @madisonwiththeromper.

She said that she’s not at home right now but due to all the requests, she plans to make a video explaining exactly how she’d been wearing it for four years.

It might have been a mistake but we all love a versatile garment. 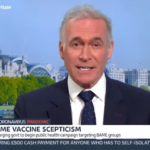