Netflix viewers have found themselves captivated with the mysterious tale of Lupin.

A retelling of the French classic novel, the tale of thief and master of disguise Arsène Lupin through the eyes of wannabe Assane Diop is a lot of fun.

Part thriller, part heist, part revenge series, we still have to wait for the second half of the series to find out the truth of what happened.

But what are you expected to watch in the meantime? Don’t worry, we at Metro.co.uk have you covered.

Here’s some thrillers that you can watch next on Netflix…

The Chalet is a mystery thriller set across two different timelines – 1997, and 2017.

Centred around a reunion of childhood friends, the picturesque French Alps chalet is soon the site of grave danger.

Cut off from the rest of the world, old issues and secrets start coming to light, including some that have been buried for a reason…

La Mante (aka The Mantis) is a little Silence Of The Lambs and that’s a good thing – because it’s insanely captivating.

The story follows Detective Damien Carrot, who is left in charge of an investigation of a serial killer wreaking havoc around Paris.

The murders appear to be a copycat ofJeanne Derber, a female serial killer who has been locked up for the past 25 years for her crimes.

In order to stop the new psychopath, the police have to join forces with the original.

As if that’s not bad enough, the biggest twist? Le Mante is Carrot’s own mother.

Dark was the first German original series that Netflix produced, and became a cult hit around the world.

In the complicated tale, children start going missing from a small town called Winden – and while their loved ones try and find them, their complicated private lives come bubbling to the surface.

It’s hard to say too much without giving too much away, but we promise it’s gripping.

The show ran for three seasons before wrapping up in 2020, so you actually have the full story to be digging into.

If you’re into true crime – this documentary series might be the one for you. But we warn you – it’s a heartbreaker.

In 1984, four-year-old Gregory Villemin was kidnapped from his family’s home, and was found dead just hours later in the Vologne river.

The case became huge in France – for scale, it was as big as the hunt for Madeleine McCann here – and yet a killer was never caught.

It’s made even more complicated when it was revealed that the Villemin family had been receiving threats in the run up to the crime, but despite everything, they’ve had no luck finding who murdered the little one.

Ozark isn’t a foreign-language show, but kind of has the vibe of a dark Icelandic drama – and the tale is just too gripping to miss out on.

One of Netflix’s biggest success stories, Ozark follows Jason Bateman and Laura Linney as two white collar criminals who try to flee for their lives and head to the Ozarks in order to lie low and start a new business afresh.

Turns out money laundering for a Mexican drug cartel is a bad idea… who knew!?

But the quiet rural town has secrets and a criminal underworld of its own, and soon the Byrde family are in more trouble than they ever thought possible – but they’re kind of loving it.

Starring Jennifer Connolly and Daveed Diggs, Snowpiercer is a Netflix/TNT crossover that became one of the must-watch shows of 2019.

Thankfully we don’t have to wait too long for a second season either.

Based in a dystopian future where the world has frozen over, what’s left of humanity is forced to live on an ever-moving train that tracks around the globe.

But that doesn’t stop class wars still being a very prominent thing, and when a murder occurs on board things start getting really complicated.

Spain, France, Germany and the UK all have their own spin on the show, where a suspect is brought in for questioning and interrogated by the detectives over the case.

Some look innocent until something gives away their guilt, others look so guilty there’s no way they can be innocent – and every episode is a separate tale.

The UK has been given two seasons, with an A-list cast of suspects including The Big Bang Theory’s Kunal Nayyar and Kit Harington in his first role after Game Of Thrones.

All titles are now available on Netflix.

Dancing on Ice 2021: Phillip Schofield and Billie Faiers among stars to ‘break Covid-19 rules’ as they get into taxis without face masks 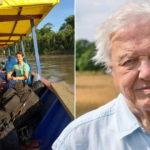