Amanda Holden has revealed that her pal Simon Cowell is ‘fighting fit’ and will be back to filming in January.

The music-mogul has been laying low after falling off an electric bike earlier this year, needing five hours of surgery and metal rods in his back to correct the damage.

As a result of his accident, Simon had to take some time off from his TV duties, including Britain’s Got Talent and America’s Got Talent.

While he was recuperating, Diversity star Ashley Banjo had a ‘full circle moment’ and became a judge on the show that made him famous 11 years prior.

Speaking to Eamonn Holmes and Ruth Langsford on Friday’s This Morning, Amanda confirmed that Simon would be back in the New Year for the BGT auditions.

‘Will he be back in the New Year?’ Eamonn quizzed?

‘Yes, I have heard it from the horse’s mouth. He phoned me in the last three weeks.

‘He’s well, he’s fighting fit, he can’t wait to get started, so when she started (BGT) auditions in January, he will be back.’

The 61-year-old had initially hoped to return to the UK for the BGT Christmas special but had to pull out, with Ashley expected to replace him again on the judging panel. 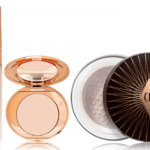 Up to 50% Off This Black Friday at Charlotte Tilbury