BBC Breakfast star Louise Minchin was literally all of us as she was seen making jokes about her ‘lockdown’ hair.

Washing your hair to say in for the foreseeable? Please, what even is a brush these days.

The TV presenter took to Instagram on Wednesday with a hilarious pictured of her looking like she was rocking bed hair right before she was due to go on air.

Snapping a selfie while her hair was all ruffled up, slightly windswept and not so sleek, Louise teased: ‘Good morning and welcome to #llockdown3 hair,’ and, boy, do we relate.

Her post had former Saturdays star Frankie Bridge applauding her efforts, while Louise’s fans were left cracking up.

One joked: ‘It looks much better than mine,’ as another commented: ‘Welcome to my world!’

‘Yup, everyday hair for me ??,’ laughed one follower, as one more said: ‘Like mine this morning wild hair.’

It seems Louise was brightening up her followers’ mornings both on and off screen, as one fan wrote: ‘That made me smile ?,’ and plenty more reassured the star she still looks just as fabulous.

Others were seen asking Louise for an update on her foot, after she was seen wearing a medical boot on BBC Breakfast in December.

She was forced to take some time away from presenting after injuring her foot, with Louise explaining on her return last month: ‘I’ve had a foot operation to fix it. It’s now on the mend.’

‘I’m still on crutches but I’m getting stronger every day,’ she said at the time.

Louise broke a bone in her foot and snapped an ankle ligament, which left her needing surgery to reconstruct her ligament.

She had injured her foot during a running challenge up and down Snowdon while training for a triathlon in 2019.

Louise tripped over on finished the event, causing her ankle to buckle, but she pushed on with her triathlon training and even completed three more events before eventually seeking medical help 18 months later.

‘My foot clearly wasn’t fixed but I keep on going from one event to another, always finding an excuse not to get it checked,’ Louise revealed in an interview with Cheshire Life.

‘I did a further three ultra-events before finally, after a challenging 26.2 miles on the Sandstone Trail, went to the doctor.’ 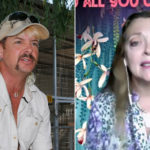 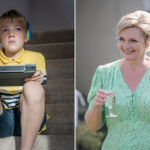 The Bay season 2: Sharon Small commends on-screen son for how ‘seriously’ he took his role