BBC Breakfast’s Dan Walker had a shocker of a morning after punching a light on set while trying to recreate a TikTok dance.

The BBC News theme song has become the unlikely craze sweeping the social media app, and naturally as a hands-on journalist, Dan had to get involved.

Interviewing the trio of dancers who came up with the routine, Dan was taught the moves to perform in the studio.

Co-host Louise Minchin was quick to whip out her camera phone and declared: ‘I’m doing the really important bit, I’m filming him.’

To be fair to Dan, he didn’t do too badly, with the girls doing a solid job of showing him what to do for each segment.

Unfortunately, it was all destined to go downhill, and when left to his own devices for the final routine, Dan’s disco-style point to the sky marked disaster.

‘I’ve just punched the light in the studio!’ Dan declared, laughing but adding a sheepish ‘sorry’ to the technicians.

‘The slight problem there was I actually punched a light in our BBC studio,’ Dan repeated to the girls, who had missed the commotion.

Louise, who couldn’t stop giggling, then asserted: ‘Don’t worry everybody, I’ve got it on film. I’ve got it.’

The BBC Breakfast also couldn’t resist taking a stab at the host, and added: ‘Maybe stick to the day job’. 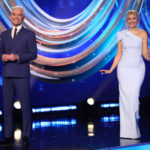 Dancing on Ice: Phillip Schofield looks like he’s ‘wet himself’ in behind-the-scenes snap 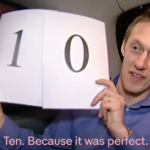 Come Dine With Me:Has anyone ever scored the maximum 40?