Benidorm star Asa Elliott is working as a supermarket delivery man during the pandemic.

The actor, who appeared in the ITV sitcom, was left unemployed when his stint on cruise ships was cancelled, due to coronavirus.

He landed a job with Asda soon after, in a bid to support his family – wife Natalie and their baby boy, Buddy.

Speaking about the job, the 39-year-old explained he initially didn’t tell anyone about his time in the supermarket, but was approached by fellow staff members who happened to be fans of the show.

Spilling the beans, he said customers have been delightful on his deliveries.

‘When the customer gets a text message telling them who’s delivering it and it has my name on, it’s not a run-of-the-mill name so some fans have thought it might be me,’ Asa began.

‘I delivered to one lady and she just had this big smile on her face and she said she thought it was going to be me delivering it, but don’t worry as she wouldn’t tell anybody on the Benidorm forum.

‘I’ve had people who’ve found out and they’ve messaged me saying they’re starting to get Asda deliveries now in the hope that I deliver their shopping. I was like, “oh my word”.’

Explaining why he didn’t share news of his job at the time, he continued: ‘I didn’t want anybody to think I was doing it for any other reason than supporting my family.’

Asa opened up about his Asda job on Twitter last week, sharing a snap of himself and a delivery van beside a throwback with a cruise ship.

‘What a difference a year makes,’ he wrote alongside the upload. ‘Find a guy who can do both.

‘I’m hoping to get a promotion to the front of the store by Easter.’

Asa was due to set sail on a cruise ship, performing singing gigs on board to delighted fans, but all plans were called off due to the pandemic.

He added that he is already booked on for numerous voyages in the ‘second half of the year’. 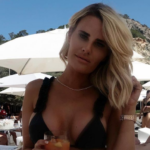