The 2021 Celebrity Bake Off line-up is without a doubt the most hun-heavy cast to date and the addition of Nadine Coyle is getting fans particularly ecstatic as they predict what’s to come.

Any true fan of the Girls Aloud singer will remember the day Nadine appeared on Sunday Brunch with Tim Lovejoy and Simon Rimmer, sealing her place as a meme queen.

For those of you unfamiliar with moment, Nadine helped the presenters in a cooking segment, as the celebs do when they join the Channel 4 programme.

But when Nadine was asked if she enjoys to cook, well… what happened next is simply the stuff of legends.

‘I enjoy cooking,’ she told Tim. ‘Baking and stuff, working with flour.’

Now on paper, that sounds obscenely unremarkable. But watch:

In turn, fans of the pop icon are ecstatic at the prospect that ‘fleyer’ could be making the overdue comeback it deserves in 2021:

Joining Nadine in the Celebrity Bake off tent this year are fellow popstars Little Mix singer Jade Thirlwall and Alexandra Burke, while Hollywood heroes James McAvoy and Daisy Ridley are also among the most famous of faces to present their dishes to judges Paul Hollywood and Prue Leith.

Sadly, Noel Fielding will be missing out on the series, which was filmed following the birth of his second child with girlfriend Lliana Bird.

Celebrity Bake Off for Stand Up To Cancer airs on Channel 4 this spring. 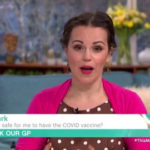 ‘We won’t be able to hug loved ones for months despite vaccine roll-out,’ warns doctor 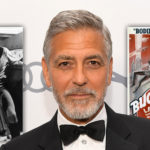