Charlotte Hawkins revealed a different side to herself by dancing to the Good Morning Britain theme tune on Tuesday’s episode.

In keeping with the rising TikTok trend of raving to the opening titles of news programmes, the presenter gave it a go herself live on air.

At one point in her routine she had a very good go at twerking which impressed co-hosts Piers Morgan and Susanna Reid.

‘Tell you what, work it baby, work it,’ Piers said as Charlotte took a bow and went back to her seat.

‘I think we should have Hawkins dancing in and out of every break this show,’ Piers continued, ‘that has got everybody going’.

Piers being Piers, he was unimpressed with the trend saying a video of the trio of TikTok dancers busting a move to Good Morning Britain.

He commented: ‘I don’t think any video has ever excited the team more than that, or made something in me slightly die.

‘If you’ve every wondered about this show being very much “me and the others”. They all love that.’

Watching Charlotte put on an earlier performance to the GMB theme, Piers joked about her stint on Strictly: ‘It’s baffling why Brendan Cole [Charlotte’s professional partner] was kicked off Strictly after that.

‘Just reminding the nation why they voted you straight off.’

Susanna said: ‘I thought that was absolutely awesome, by the way Charlotte.’

Ahead of her performance on the episode, Charlotte poked fun at the dark red, checked dress she had on.

Posting a selfie on Twitter, Charlotte said: ‘In other news this morning I appear to have come dressed as a Routemaster bus…’

Charlotte’s efforts were definitely a sight better than BBC Breakfaster newsreader Dan Walker’s, who accidentally punched a studio light while trying to give the BBC News theme dance a go. 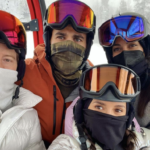 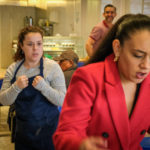