Curtis Pritchard has revealed that he broke down in tears when talking about his split from Maura Higgins on Celebs Go Dating.

In scenes which are due to air later this month, the 24-year-old got emotional during his first therapy session with dating experts Anna Williamson and Paul Carrick Brunson.

Curtis, who met Maura on Love Island, explained that the reason he got upset was that he ‘felt safe’ talking with the love gurus about the break-up.

‘I cried because I hadn’t spoken to anybody about the Maura situation before,’ Curis began.

‘To talk openly and freely was a breath of fresh air.’

‘It was nice to be able to speak with people I felt safe talking about it with,’ he added to The Sun.

Curtis and Maura ended their seven-month romance in a phone call in March 2020.

Maura confirmed the couple’s split in a statement on Instagram, where she assured fans there is ‘no bad feeling’ between herself and Curtis, adding that their relationship just ‘wasn’t meant to be’.

Since then, the reality star has gone on to find love with fellow Islander Chris Taylor.’

In November 2020, the pair both shared a photo of them almost kissing in front of a pool and skyline in Dubai, confirming their relationship.

Chris wrote alongside the snap: ‘Turns out I fell in love with my best mate’ while Maura added: ‘He’s mine’ along with a love heart emoji.

At the time, Curtis told how he felt ‘betrayed’ after finding out about their relationship.

‘When I saw the pictures, I’d be lying if I said I didn’t feel hurt,’ He told The Sun.

‘I was upset. How long has this truly been going on for?

‘At the time I was accused of cheating, but I never did. I was always faithful to Maura.’ 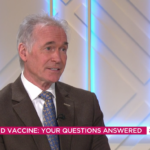