Earlier this week, it was announced that comedian and actor Rufus Hound had dropped out of the competition after testing positive for coronavirus.

He was replaced by comedian and TV presenter Matt, who was partnered with professional skater Vicky Ogden.

For his first dance on the ice, Matt and Vicky took on the Paso Doble for Dance Week, bringing the drama with a routine set to Somebody Told Me by The Killers.

However, Christopher gave them a score of 5, which Ashley thought was a little bit harsh.

While Christopher stood by his score, Ashley added to Matt and Vicky: ‘For your first show, I think you did a great job.’

He said that while he wanted ‘more Paso Doble’ and ‘more energy’ from their routine, he’s looking forward to seeing what else the couple have in store in the competition.

‘Wow well done Matt Richardson, would never have known that was his 1st dance!’ another remarked.

When footage was shown of Matt and Vicky in training, it was revealed that Matt shared a video call with Rufus, who gave him some advice about competing on Dancing On Ice.

‘I think if I had to give any simple word of advice, it would be… be really good,’ Rufus said, prompting Matt to burst out laughing.

Dancing On Ice airs on Sundays at 6pm on ITV. 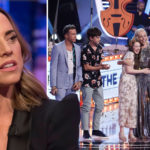 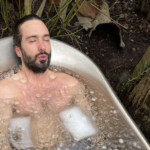 Joe Wicks ‘never felt more alive’ after submerging himself in bath with 20kg of ice: ‘What an experience’