Dancing On Ice star Denise Van Outen vomited and nearly ‘passed out from the pain’ after her painful injury.

The TV presenter dislocated her shoulder and fractured it in three places during a horror fall while rehearsing for the show – leading her to leave the ITV series.

She has now been replaced by gymnast Amy Tinkler, who will be skating alongside Joe Johnson.

The 46-year-old initially thought she had dislocated her shoulder and damaged her tendons, and took to the ice in a sequinned sling like a total pro.

However, while she was all smiles for the cameras, behind the scenes it was a totally different story.

‘I came off after that show and vomited, and I nearly passed out because I was in so much pain,’ she confessed.

‘I can’t rotate my arm or move it too much. I’m very limited with movement, and there was only ever going to be so much I could do on the ice.’

At the time, she was worried that any further complications could see her on a ‘surgeon’s table’, something she understandably wanted to avoid.

Despite the excruciating pain she was feeling at the time, Denise completely shunned strong medication ahead of her performance, instead just relying on paracetamol.

The Gogglebox favourite told the Sun that she’s already looking forward to the final, and ‘would love to’ return to the ice, to unveil what herself and dance partner Matt Evers had been working on.

When asked whether she could make a surprise return in next year’s series – similar to Jamie Laing’s Strictly Come Dancing favourite – she added: ‘I don’t know. That’s a call for ITV.’

Denise announced her departure on Instagram, following the second week of live shows.

‘GUTTED! If you’ve been watching @dancingonice you will be aware that just over a week ago I had a nasty fall and injured my shoulder,’ she began the lengthy caption.

‘I managed to skate my first dance with @themattevers on the live show through a gritted smile because the pain was unbearable. I’ve tried as hard as I can to carry on because I love the show and the amazing team in front and behind the cameras.

‘Initially, we thought with rest I could make a return to the ice, but a recent MRI scan has shown that I have 3 bone fractures as well as a partial dislocation. OUCH! No wonder I’ve been in agony.’

‘I won’t be able to do any lifts, tricks or solo skating on the show due to my injury. I’m going to bail out gracefully with my DOI bling sling,’ she continued. ‘@themattevers has been the most incredible support and skate partner (a true friend) and I’m so grateful for his expertise in teaching me (ice virgin) the basics.

‘I just wish I was well enough to learn all the fabulous tricks my injury won’t allow me to do. Chair dancing on Ice with a massive pie won’t get us points on the leaderboard.’

‘I’m actually proud of what I’ve achieved ( not much, lowest scores so far) . If you don’t mind I’m going to give myself a couple of points for bravery for doing cartwheels on Ice at 46 with broken bones.’

Denise concluded: ‘I wish all the celebs, pros and judges the best of luck for the rest of the series. I’m rooting for you all. Bunch of legends.’

Dancing On Ice continues on Sunday, at 6pm, on ITV. 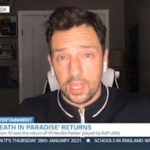