Musician Lady Leshurr started her routine for the launch show of Dancing on Ice 2021 in one of the best ways possible – showcasing her rapping skills as she took to the ice.

During the opening episode of the new series, Lady Leshurr performed for the very first time with her skating partner Brendyn Hadfield.

But one of the highlights of their performance came right at the beginning, with Lady Leshurr spitting bars as she emerged on the ice.

One viewer said that Lady Leshurr’s Dancing on Ice rap was ‘the best thing’ to happen in the year so far.

‘Two weeks into 2021 and Lady Leshurr rapping during her performance is the best thing to happen,’ they said.

Another said that they were ‘obsessed with @LadyLeshurr rapping before her dance’.

‘YESSS! @LadyLeshurr smashed it!!!!’ someone else tweeted.

One fan said that in their opinion, Lady Leshurr rapping at the beginning of her performance before skating to Little Mix is ‘the most iconic thing to ever happen on this show’.

Lady Leshurr couldn’t handle her excitement when Little Mix member Leigh-Anne Pinnock reacted to her skating to their song.

‘NOT LITTLE MIX POSTING THAT THEY SEEN OUR PERFORMANCE,’ Lady Leshurr tweeted in response. ‘WE LOVED IT!! THANKYOU’

At the end of their routine, Lady Leshurr and Brendyn were awarded 25 points out of a possible 40.

She found herself joint top alongside Jason Donovan, Joe-Warren Plant and Rebekah Vardy, with the recently-injured Denise Van Outen and Rufus Hound receiving the lowest and second-lowest number of points respectively.

Despite not being on top of the leaderboard, Rufus became the first contestant to receive a Golden Ticket from the judges, meaning that his place in the competition is guaranteed up until Musicals Week.

At the end of the show, it was announced that Lady Leshurr would face the skate-off in next week’s show.

Dancing On Ice 2021: Emotional Rufus Hound slams MPs ‘who don’t want to feed hungry children’ as he gets first ever golden ticket 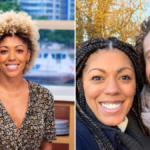