Dancing On Ice bosses have reportedly decided against axing Rufus Hound from the show, following calls to do so over homophobic and racist tweets he previously posted.

The comedian, 41, made his skating debut during Dancing On Ice’s launch show and impressed the judging panel, as he was given the first ever golden ticket of the series.

However, he’s now come under fire for tweets he previously shared, with ITV receiving calls to axe Rufus from the competition over comments he made on social media, accusing former Prime Minister Theresa May of planning the Manchester Arena terror attack in 2017.

It’s not unusual for ITV to remove stars for past tweets that were considered offensive, as Jack Maynard lost his place on I’m A Celebrity for the same reason.

Sources told The Sun that Dancing On Ice bosses are not taking action against Rufus.

They claimed: ‘Dancing On Ice have made their position clear and while Rufus’s tweets have been quietly condemned, right now it’s not being seen as an offence which would require his removal.’

The sources continued: ‘It seems there is one rule for some, and one for another. After Jack was taken off I’m A Celebrity for the same kind of tweets, it was assumed that Rufus would be told he should step down.

‘But it’s been made clear to those working on the show that they’re standing by him.’

It comes after bosses faced calls earlier this week to remove Rufus for controversially re-tweeting a post accusing Theresa May of being behind the Manchester bombing. It read: ‘Given the attacker was known to MI5, the timing seems fortunate for May that an attack ‘slips through’ as Labour are making progress.’

‘Apologies for mild tinhattedness, but I’ve been thinking the same. Esp. as she was Home Secretary for so long. I guess I’m not really alleging it as true, more that I don’t believe our establishment is incapable of such evil. Especially during an election,’ Rufus allegedly also tweeted, but has since deleted the post.

MPs have hit out at the star for his previous posts branding them ‘deeply offensive’ and claiming ITV have a ‘moral responsibility’ to remove contestants using the show as a ‘political platform’.

Rufus took aim at the government following his first Dancing On Ice performance, where he threw shade at the recent school meals scandal.

Other tweets Rufus has been called out for saw him call Ed Sheeran a ‘g**lord’ and use the word ‘r****d’ in another posted in 2011.

Following criticism, Rufus has addressed his past tweets and insisted he is ‘trying to do better’ in a lengthy statement he shared to Twitter.

It began: ‘Hi there Occasionally for different reasons, people trawl through my timeline (I’ve been on this site for 11 years, so that’s a fair bit of material) to find stuff that they can take offence at or inspire offence in others with.

‘So, I just want to make something abundantly clear: When I was a stand-up and a younger man, the culture on here was much darker and edgier. I made jokes about race, sexuality, politics… everything. You may not like those jokes. You may find those jokes offensive or upsetting. And if you do, there’s a very good chance that I hadn’t thought about them or the subjects they covered enough.’

Rufus explained that over the last few years he has made a conscious effort to ‘absent himself from the pop mainstream’ to focus on theatre and other work opportunities instead – some which have led to increased media attention.

Rufus stated: ‘If anything I’ve said or tweeted in the past was stupid or hurtful, it’s because I can be stupid and hurtful. I, sincerely, try to understand and do better. Ask anyone who knows me. I am not short of thinking. Paralysingly, sometimes…. it’s more that I just want to say people change. People grow. People improve. Whilst I still have endless improvements to make, undoubtedly, I’m trying.’

He continued: ‘So, if a load of old sh*t I came out with years ago offends you or upsets you, know that there’s a very good chance it offends and upsets me too, which is why I stopped saying it. I believe in equality of opportunity, in love as a superpower, in women. I believe you should be free to do anything you like as long as it doesn’t endanger the physical wellbeing of other people.

Ending things on a lighter note, he joked: ‘I believe that, when all is said and done, Salt and Vinegar Squares are the absolute best crisps.’

Rufus was forced to miss Sunday night’s show of Dancing On Ice as he is currently self-isolating for 10 days after being exposed to Covid-19. 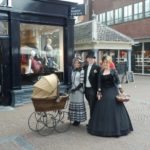 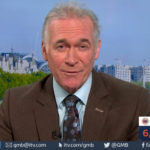