Dancing on Ice contestant Denise Van Outen revealed she spent 15 hours with a dislocated shoulder because she didn’t ‘want to bother the NHS’.

The West End star was forced to quit the ITV show last month after she suffered a nasty fall during rehearsals with dance partner Matt Evers.

The mum-of-one’s comments come after the show was criticised for ‘putting a strain’ on the NHS due to the number of cast members being sent to hospital.

Speaking via video link on Monday’s Loose Women, Denise told the panel that her shoulder is still ‘really sore’ but she is resting at home following the fall.

‘I partially dislocated it, after the rehearsal I spent 15 hours with my shoulder being dislocated, as we didn’t really want to bother the NHS knowing that they’re so overstretched,’ she began.

‘It wasn’t until the pain was so unbearable that I went in to see them. They put my shoulder back in, but it popped out again.’

‘I skated on it again in the most excruciating pain,’ Denise added. ‘I cannot tell you, and then after that had an MRI and it was fractured in three parts. So I’ve got three fractures and a dislocation.’

After her exit, Denise was replaced by gymnast Amy Tinkler, who is skating alongside Joe Johnson.

Denise isn’t the only celeb who has been forced to drop out of the competition this year.

Comedian Matt Richardson, who was voted off on Sunday’s show, had stepped in to replace Rufus Hound, who quit the series after testing positive for coronavirus.

This weekend, it was also announced that reality star Billie Faiers will not be returning to the competition after experiencing a nasty fall and becoming concussed.

She will not be replaced by another celebrity, as the two substitutes have already stood in for other stars.

Before Graham Bell was eliminated, his professional skating partner Yebin Mok was rushed to hospital after suffering a severe cut on her shin from a skate blade.

Yebin was replaced by Karina Manta as Graham’s partner. 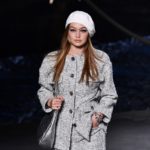 Pack Away Your Beanie, The Beret Is Back

This Beautiful Nail Polish Is All Over My Feed Right Now