Dancing on Ice contestant Lady Leshurr has responded to viewer backlash after she and her dance partner Brendyn Hatfield landed in the first skate-off of the series.

Despite the positive feedback she received from the judges, being placed joint top of the leaderboard, it was announced after a public vote that she and Brendyn will take part in next week’s skate-off.

And viewers weren’t happy about it…

The 32-year-old musician, who opened the routine with a rap, has since responded to the backlash as she told her fans that she ‘can’t be upset’ about being in the skate-off.

Following the first show, Lady Leshurr did an Instagram live video where she began by thanking fans for ‘their love and support’.‘Thank you so much for tuning in and for giving me so much love and support. Me and Brendan we have been training so hard for that routine,’ she began.

‘I’ve got to give a round of applause for every single pro and every single celeb on the show because it takes over your whole life.

‘I am so happy with the outcome and the performance went really well. I couldn’t have done it without Brendan.’

After inviting Brendyn into the live video, the songwriter went on to address the criticism and answer some of her follower’s questions.

One fan watching the live called Jeff told her that she shouldn’t be in the skate-off, to which Lady Leshurr stepped in to defend the judges’ decision and said the other ‘celebs are more passionate’ about the competition.

‘ Imagine, everyone is doing everything I am doing but they are going in even more.’

Speaking about why she wanted to take part in the ITV series, the music producer added: ‘I came on to the show to bring the entertainment, to bring the bants, to show a different side to me to a whole different demographic that would never know who I am in a million years.

She later went on to tell fans that ‘she can’t be upset’ by being in the skate-off as she continued: ‘I was really bad at skating that’s why I can’t be upset.

‘I am just so happy that I’ve done it. I’ve made my mum proud, I have made my sister proud, my sister was looking over me I know it.’

Comedian and actor Rufus Hound, who received the second-lowest score last night, was awarded the coveted Golden Ticket from the judges.

This means that he has an automatic place in Musicals Week and was exempt from the public vote.

The first show also saw Denise Van Outen make her first appearance on the show amid fears she wouldn’t be able to take part due to an injury she sustained during training.

On Saturday, it emerged that the actor had been rushed to A&E after suffering ‘partial dislocation and tendon damage’ to her left shoulder. 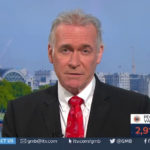 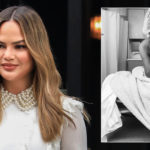