Myleene Klass wore a blindfold during her Dancing on Ice rehearsals just days after she suffered a nasty fall and ‘blacked out’.

The musician, who will make her debut on the show tomorrow night, shared a video to social media of her and dance partner Lukasz Rozycki training while wearing blindfolds.

In the clip, Myleene wore a pale green mask as the pair skated to Take Me To Church by Hozier.

‘Blindfolded. Bow down for @IceLukasz,’ she captioned the video.

It comes just a few days after Myleene knocked her head on the ice and ‘passed out’.

Speaking about the incident, which will be shown on tomorrow night’s instalment, Myleene said: ‘There are loads of things I am learning as I go along, but I didn’t realise that when you do the spins, you can have little mini blackouts when you get dizzy.

‘So we were doing a spin and when I watched the footage back and like the next thing you see is a banged head.’

‘We were doing the rehearsals last week, and I didn’t realise it was a blackout as it’s a very weird feeling,’ she added to The Sun.

The former pop star really has been in the wars over the past few weeks as she also recently injured both of her knees while training.

‘I just felt embarrassed by my injury because it’s not a very sexy injury,’ the 42-year-old told Metro.co.uk and other press.

Taking to the ice alongside Myleene on Sunday are Towie star Billie Faiers, Corrie’s Faye Brooks and Capital FM DJ Sonny, as well as Olympians Graham Bell and Colin Jackson. 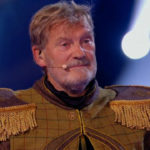 The Masked Singer UK: Glenn Hoddle reveals who he thinks could win competition 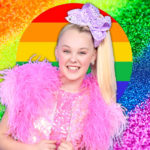 JoJo Siwa coming out is an important moment for LGBTQ+ youth