Dancing On Ice star Sonny Jay shared a dramatic mishap during rehearsals hours before the launch show when he dropped his professional partner Angela Egan.

The Capital Radio DJ posted a jokey behind-the-scenes clip on Instagram from rehearsals as he tried to lift Angela on the ice rink.

The pair were going through their routine with Celine Dion ballad My Heart Will Go on playing over the top of the video.

Unfortunately as he tried to pick her up Sonny lost his balance, sending them both tumbling to the ice as the music distorted and went out of key.

Neither of them were hurt and the video ended with them both dusting themselves off ready to have another go.

The radio presenter captioned the video: ‘It’s only 24 hours until #DancingOnIce. What could possibly go wrong?’

He received plenty of support from his friends on Instagram, with fellow DJ Mista Jam making a good point: ‘At least you did it in rehearsals. You’ll be fine on the live show. You’ve got this.’

Myleene Klass, another contestant, wrote: ‘I cannot stop watching this. Howling’ along with a string of laughing emoji.

Shirlie Kemp, whose son Roman Kemp also hosts at Capital FM, said: ‘Can’t wait for it ? I think your going to be fantastic ???’.

It’ll be alright on the night, as they say!

There drama off the ice for another contestant, Denise Van Outen, who has been treated in hospital following a nasty fall.

The 46-year-old was rushed to A&E after tumbling face first during rehearsals.

While it’s not yet been confirmed whether Denise will be able to take to the ice tonight, sources have told us that they are hopeful she will appear.

Dancing On Ice starts tonight at 6pm on ITV. 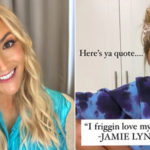 Dancing on Ice 2021: When was Jason Donovan on Strictly and did he win?