Dancing On Ice’s Graham Bell has spoken out after accidentally stabbing his pro partner with his skating blade.

The Olympic skier was partnered up with Yebin Mok and was due to debut in the competition this weekend alongside five other duos on this year’s line up.

However a freak horror accident this weekend meant Yebin was rushed to hospital, with Phillip Schofield and Holly Willoughby revealing that the injury was so deep it ‘exposed tendons’.

Speaking after the injury, Graham said in a statement: ‘I fell when we were training on Monday and Yebin my pro-dance partner fell onto the back of my skate.

‘She was cut quite badly on the shin and needed an operation to clean and stitch up the wound.

‘She spent Monday night in Watford hospital and was released yesterday, luckily there was no nerve or tendon damage.’

As a result of the accident, Yebin will be replaced by Karina Mantra as Graham’s partner while she recovers over the next two to four weeks.

Graham’s debut has also been moved to next weekend so he can train with Karina.

‘It’s going to be really tough learning our routines again with someone new, but Yebin will be on hand to coach us both,’ he said.

‘It is now a massive incentive for me to stay in the show so that I can get Yebin back on the ice.’

Graham and Yebin aren’t the first contestants this year to shed blood on the ice.

‘We were practicing a trick and we changed it slightly from something that we would normally do – and we did it on a daily basis and everything would go right and nothing would go wrong,’ a mortified Rebekah explained.

‘On this occasion, it went very wrong and the back of my heel and my blade sliced his face open.’

While he was absolutely fine and, after being rushed to hospital for care, was allowed to continue, Rebekah said it caused her to have a wake-up call.

‘It was quite scary. But it brings back the realisation that what we’re doing is really bloody dangerous, but he’s fine. It’s a bit dramatic but he’s OK,’ she said.

Dancing on Ice starts Sunday January 17 at 6pm on ITV. 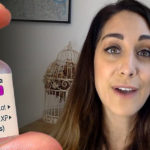 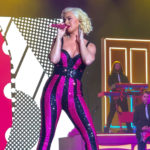