Denise Welch has stepped in to defend the Love Island and Towie stars currently working in Dubai as the UK remains in a national lockdown.

During Monday’s Loose Women, the panel were discussing whether influencers should be allowed to travel abroad for work and if it is ‘necessary’ that they do so.

Influencers including the likes of Georgia Harrison, Josh Ritchie and Yazmin Oukhellouhave been seen partying it up in Dubai in recent weeks, despite intense criticism aimed at those who have escaped London in lockdown for work.

England is currently in its third national lockdown and international travel is prohibited unless given a legally permitted reason to do so, such as work.

Speaking about the controversial topic, Denise began: ‘I feel some people are misjudging the tone of the nation and I get that.

‘But at the same time, I think what’s happening in the pandemic is that we are creating a very judgemental society.

‘It has given a voice to a lot of people who prior to the pandemic would have walked around people’s roads at the weekend looking over their fences, desperately wanting to see someone who has erected a clothes line without planning permission.

‘It’s given a massive voice to those who would be straight on the phone to the parish council.’

The 62-year-old went on to point out that the rules regarding travelling abroad ‘have been woolly’.

‘At the moment you can’t travel except if it’s for work but only a few weeks ago you actually could,’ she continued.

‘Those people who were adhering to the holiday rules is that they were getting a test before they went and some of them were getting another test when they got there.

‘There were actually following the rules.’

Linda Robson disagreed with Denise as she feels that the influencers are ‘rubbing people’s noses in it’ by going on holiday.

She explained: ‘I’d love to go (on holiday) but we can’t go at the moment and I do think it’s rubbing people’s noses in seeing them on the beach, in their bikinis or whatever.

‘I’m sorry but it’s not essential to be an influencer.’

‘They may have a mortgage to pay,’ Denise interrupted. ‘And they’ve got children.’

‘They are entrepreneurs, this is their business, they do have bills to pay and irrespective of what’s happening in this current time, they have to work,’ Charlene chipped in.

Linda added: ‘They do have to work, but for us, that’s can’t travel they can do it in their bedrooms can’t they.’ 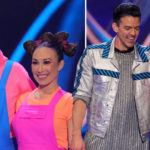 Dancing on Ice 2021: Viewers brand show ‘a fix’ after Lady Leshurr lands in skate-off and Rufus Hound is saved by judges

What is going on with Kylie Jenner’s shower? Star roasted over bathroom in $36m mansion