The Simpsons have a long history of spookingly predicting the future and it seems like they may have accidentally managed to do it again – either that, or Kamala Harris is a major Lisa Simpson stan.

In Bart To The Future, an episode saw Lisa become the first female President of the United States as she wore a purple jacket, pearls and earrings.

Today, a historic moment in world history saw us all watch Kamala Harris become the first female, black and South Asian American Vice President and mentions were given to her outfit.

Purple is a colour Kamala often wears as she associates it with Shirley Chisholm, who became the first black woman elected to the United State Congress. She later ran for President in 1972.

Pearls have also become a staple of her fashion in homage to her Harvard University sorority Alpha Cappa Alpha.

But in terms of fashion, how similar do Kamala and Lisa’s outfit choices look? Even down to those circular pearl earrings and the necklace, they both have good taste.

Of course, like most Simpsons predictions, this is purely a coincidence but it hasn’t gone unnoticed on social media.

Even before becoming vice president, Kamala has had a very successful career in politics.

She served two terms as the attorney general of California, and won the 2016 Senate election.

She was officially sworn in to her new position alongside President Joe Biden on Wednesday January 20.

In a tweet, she simply said: ‘Ready To Serve’ after making her pledge at the Capitol in Washington DC. 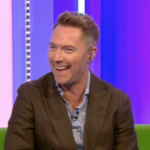 How old is Ronan Keating as The One Show presenter refuses to disclose age on air?