John Bishop was put through a ‘rigorous’ audition process for his part in Doctor Who, with showrunner Chris Chibnall revealing he had his eye on him years before he was actually cast.

After the New Year special Revolution of the Daleks aired, fans were stunned by the news that everyone’s favourite Liverpudlian comic would be joining Jodie Whittaker (the Doctor) and Mandip Gill (Yaz Khan) in the Tardis.

Teasing what’s to come, Chris told Doctor Who magazine (via Radio Times): ‘I’ve always got my eye out for performers who are loved, and wondering how good they might be as actors.

‘There’s such a great history of performers who start out as comedians transitioning into becoming terrific actors – the best example being Robbie Coltrane in Cracker. John’s somebody I’ve been keeping a beady eye on for years.’

However, it didn’t automatically land him the role, with the star still having to audition.

‘As ever on Doctor Who, we put him through a rigorous multi-session audition process, which he engaged with brilliantly and humbly,’ Chris recalled.

The 54-year-old is set to play new companion Dan, replacing Bradley Walsh (Graham) and Tosin Cole (Ryan) after they left in the New Year special in, frankly, a heart-shattering episode.

He said at the time: ‘If I could tell my younger self that one day I would be asked to step on board the Tardis, I would never have believed it.

‘It’s an absolute dream come true to be joining Doctor Who and I couldn’t wish for better company than Jodie and Mandip.’

Meanwhile, The Chase host Bradley has high praise for his replacement – and is hoping he gets to bring out some witty quips during his time on the show.

He told presenters Alex Jones and Amol Rajan on The One Show: ‘I have spoken to Bish a few times, Bish is a pal of mine, and he is going to do fantastic. Well, because not just that, Bish is a fine actor.

‘He has worked with Ken Loach and everyone so Bish knows exactly what he is doing. He is a fine actor and a funny dude.’ 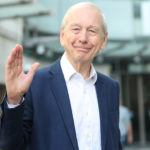